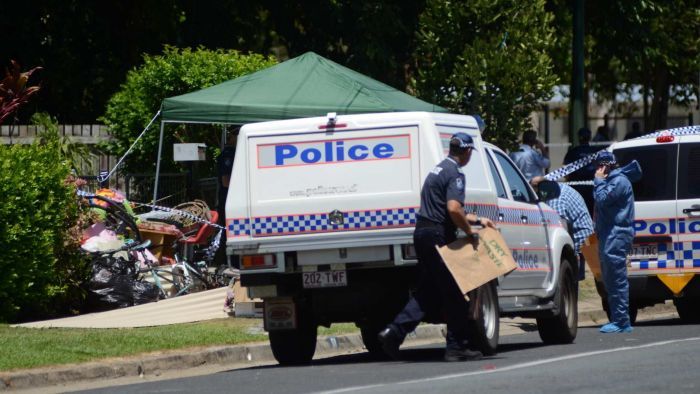 Those were the heartbreaking cries of a father who was so distraught he had to be helped as he walked along Murray Street in Cairns towards a makeshift memorial just metres from the spot where his children died.

They are believed to be among eight, aged two years to 14, who were allegedly murdered by Mersane Warria, the 37-year-old mother of seven of the dead children and aunt to the eighth.

She has been under police guard since the bodies of the children were discovered at her home in the housing commission suburb of Manoora on Friday morning by the woman’s eldest son, aged 20.

On Saturday she was formally charged with eight counts of murder at a bedside hearing at a Cairns hospital where she is being treated for stab wounds.

There are many unanswered questions as to what exactly went on at 34 Murray Street that led to one of the most horrific tragedies to hit the tourism hub of Cairns.

Detective Inspector Bruno Asnicar said the tragedy had taken a huge toll on the family, police and the community.

“It’s clearly the most tragic event we’ve had to deal with (in Cairns),” he told reporters.

He said autopsies on the victims were ongoing but as the matter was now before the courts it was unlikely the details of just how they died would be released by police.

“Anything I can say has been very, very limited,” he said.

“This is going to be a long process,” he added.

“I don’t intend to hand back that scene until I do know [what happened in the house] and I’m not there yet.”

Although knives from the scene are being forensically examined, suffocation is also a possible cause of death, he said.

Insp Asnicar refused to comment on reports that the drug ice may have played a part in the deaths, saying any details along those lines would be presented in court.

Streams of residents, family members and strangers laid flowers, teddies and cards at a makeshift memorial at a small park just metres from the house where the children were found dead.

On Saturday morning a large group of people, believed to be relatives of some of the children, brought tears to eyes of many gathered at the park as they read some of the tributes left for their little ones.

As well as the grieving father, a distressed older woman could be heard calling for her grandchildren.

Crowds at the community centre in Murray Street and local churches in Cairns remembered the children – four girls aged two, 11, 12 and 14 and four boys aged five, six, eight and nine.

For many at the centre, it was also a chance to reflect on the future of Murray St, which is notorious for problems and police call-outs.

Reverend Rodney Minniecon likened the community to a mother giving birth – she had to go through pain before creating new life.

“The families are fighting one another – our family community, even family bonds are broken,” Rev Minniecon said.

“The pain of seeing what’s just happened can reunite and rekindle a fire within us that we do need one another.”

Services were also held in Brisbane and large crowds gathered at memorials in Townsville and Cairns on Sunday night, including one at the eldest child’s school.

Indigenous police liaison officers have been sent to the family’s native home in the Torres Strait Islands to offer support and elders from that community met on Saturday in Cairns.