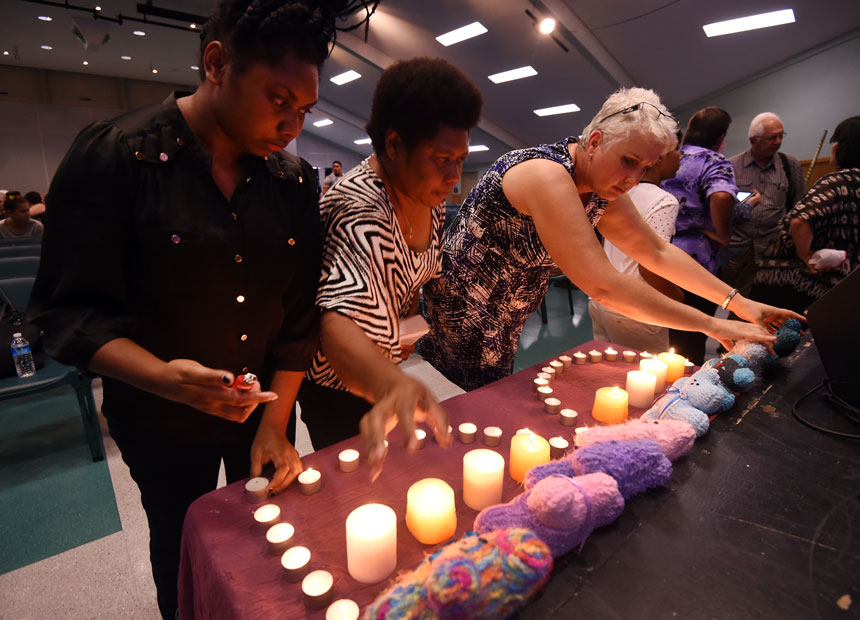 A grandfather at the centre of one of the nation’s most horrific tragedies has reached out to others mourning the alleged murders of eight children in Cairns.

“It’s a horrific situation that has happened but God is here to set you free,” Pastor Lifu Sipi told a packed memorial service on Sunday night at Trinity Bay State High School in Cairns.

“Only God can give us the rest that we need,” said the pastor, who told AAP he is the grandfather to the seven younger children.

• Mum charged with murder
• Grief, despair and a little ray of light for Cairns

Just last week a 14-year-old girl, the eldest of the eight children found dead at a house on Murray Street in Manoora on Friday, farewelled her friends as the school year came to an end.

On Sunday night many of her friends and some relatives of the seven other children who died gathered at the school to comfort one another and try and come to terms with the horrific tragedy.

Among the crowd was the father of some of the younger children. Earlier on Sunday he had cried out “my babies, my babies!” and collapsed at a makeshift memorial for the children just metres from the house where they were found dead.

When asked if he had a message for those grieving, Pastor Sipi recited a verse from the bible.

“Here though I walk through the valley of the shadow of death I shall fear no evil and I shall dwell on the house of the Lord forever and be at rest,” he told AAP.

Others who spoke at the memorial told those present to support one another, to not lose faith in God and reach out if they needed help.

Tears flowed, mothers held their children close and friends held hands as beautiful words of hope and love sung by gospel singers drifted across the mourners.

At the front of the crowd candles flickered, moving shadows across eight knitted teddy bears – one for each of the children taken too soon.

Other services have been held in Townsville, Brisbane, Cairns and the Torres Strait Islands, where the family are from, over the weekend.

Mersane Warria, 37, the mother of seven of the children and aunt of the eighth, was on Sunday charged with eight counts of murder in a bedside hearing at Cairns Base Hospital.