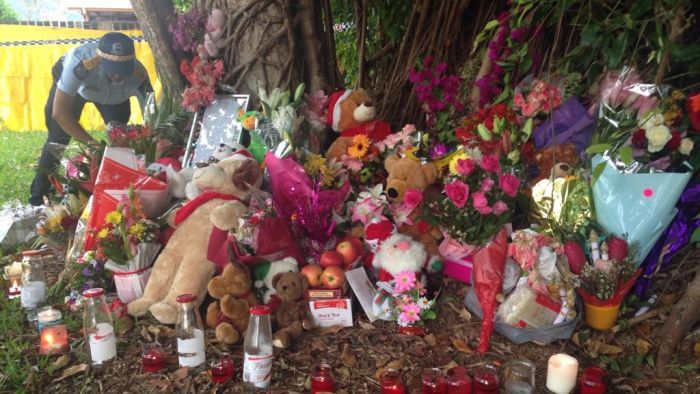 Teddies, food and Christmas presents left at the scene.

Cairns residents continue to leave dozens of flowers and gifts at a makeshift shrine outside a home where eight children were found dead.

The children’s bodies were found following what was believed to be a multiple stabbing on Friday morning.

The 37-year-old mother of seven of the children found at the Murray Street home has been arrested for murder. The eighth child is the woman’s niece.

The woman was also found at the home in the Cairns suburb of Manoora on Friday with chest and neck wounds.

Officers have recovered several knives from the scene that are being forensically examined.

Outside the house this morning there was a growing tribute to the children, who were aged from 18 months to 14 years, which showed the immense grief felt by Cairns locals.

There were some emotional and heart-wrenching scenes of people leaving baby teddies and small teddy bears wearing Santa hats.

People who do not know the family have laid flowers, left notes and Christmas presents wrapped up for the children, with one lady putting down an advent calendar and some mince pies.

“Rest in peace. We are so sorry your lives have been taken so young. It’s an absolute loss of innocence,” one note said.

Sisters Jade and Crystal went to school with one of the victims and would have sleepovers at the Murray Street home.

They described their friend as sweet and very close with her family.

“Me and my friend were going to the shops and we decided to come have a look where all the police were and the tapes were being put up,” one of the girls said.

“Then my mum rang me and said one of my friends had passed away and I just cried, stayed here for a while – it’s very shocking.”

Local woman Lency Piva said the tragedy had taught her a lesson about looking after neighbours.

“When there’s a noise you don’t even look across – we should do something about it,” she said.

“A very big lesson to look out for each other as neighbours.”