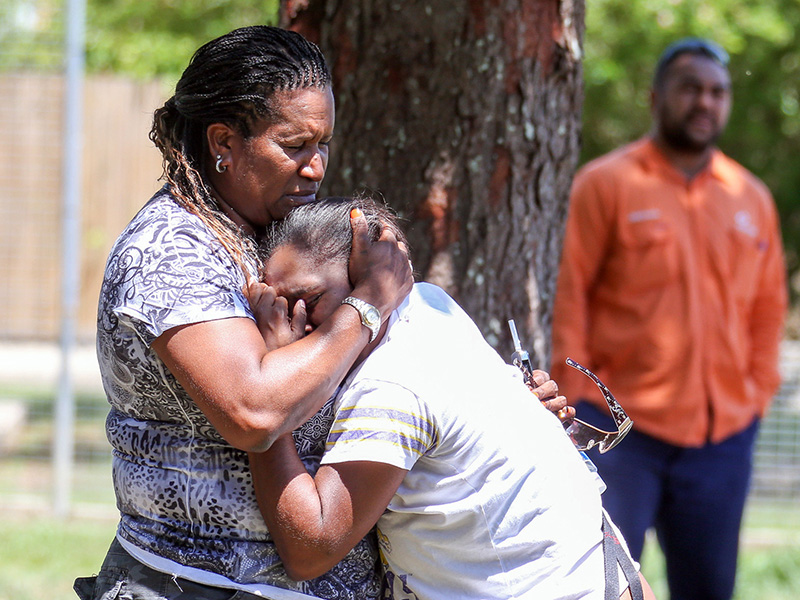 A tragic week for Australia took a horrifying turn on Friday when Queensland police confirmed that eight children between the ages of 18 months and 15 years old had been found dead at a Cairns home.

Early on Saturday, police announced the 37-year-old mother of the children had been arrested, but has not been charged. Police also revealed a number of weapons had been seized at the site.

The bodies of the dead children were removed from the house overnight.

Cairns Detective Inspector Bruno Asnicar said the mother was lucid and awake and speaking with police.

“The 37-year-old mother of several of the children involved in this incident has been arrested for murder overnight and is currently under police guard at the Cairns Base Hospital,” he said.

“Overnight we had the forensic people in the house. The deceased have been removed from the house.

“Today we will have our coroner and pathologist conducting their investigations with the assistance of the family.”

Just days after the nation watched in horror as a 17 hour siege in central Sydney resulted in the deaths of two innocent hostages, local police revealed the dead children, found at a home in the suburb of Manoora, were siblings.

Several of the children were stabbed to death, police said.

Cairns Regional Crime Co-ordinator Detective Inspector Bruno Asnicar said he believed the young victims included seven siblings and one member of their extended family, however an official identification process has not been completed.

The 37-year-old woman believed to be mother of most of the young victims was taken to hospital with a wound to her torso.

Late on Friday, he said the injured woman remained “in a stable condition” and that she was “assisting police with their inquiries” but was not in police custody.

Police were also interviewing the man believed to have made the discovery – the 20-year-old brother of the dead children.

“As it stands at the moment, there is no need for the public to be concerned apart form the fact that it is a tragic, tragic event,” Detective Inspector Asnicar said.

“We don’t take this lightly here, we will cover every angle.”

A woman who identified herself as a relative of the mother, Lisa Thaiday, told news agency AAP at the scene that the 20-year-old man arrived home to find his younger brothers and sisters dead inside the house.

She described the family and extended relatives as close-knit.

“We’re a big family and most of us are from the (Torres) Strait,” she said. “I just can’t believe it. We just found out (about) those poor babies.”

Residents, along with family and friends of the deceased, took refuge together near a children’s playground at a small park on the street.

Just metres away forensic experts were sifting through a crime scene detectives have described as one of the most shocking and distressing they have encountered.

People young and old wept, put their arms around each other and shook their heads in disbelief.

Neighbour Bessie Mareko said she did not know those in the house but would say hello when they were in the street.

Ms Mareko said she saw the woman and a number of children at 2:00am this morning cleaning up their home and putting unwanted items on the street.

“I’m really shocked. I just saw her this morning on the verandah with her kids,” she said.

Residents in the housing commission suburb of Manoora are used to commotion – it’s an area that’s been described as a ghetto, a suburb that historically has suffered a bad reputation and high crime rates.

In June, media revealed the suburb was at the centre of a secret government report into youth sexual abuse and domestic violence.

The first police to attend the scene – inexperienced, junior officers – have been given counselling.

Manoora residents, speaking to The New Daily, described Murray Street as an area with high density, low income housing where there was regular “trouble”.

In a statement, Prime Minister Tony Abbott said the incident was an “unspeakable crime”.

“The news out of Cairns is heartbreaking,” he said. “All parents would feel a gut-wrenching sadness at what has happened.”

Local pastor Nicole Dalla Vecchia, 30, joined those at the scene to offer support.

“I felt sick when I saw the picture,” she said. “It doesn’t matter if you know them or not, it breaks your heart.”

The community was like one big family, Ms Dalla Vecchia said.

Local state MP Gavin King said the region had been left in complete and utter shock and disbelief.

“I’ve spoken to police and different state agencies and our immediate priority is to provide every support and counselling that friends and family will require,” he said.

“We are already discussing in terms of the broader community impact, and what we will need to do as a community to rally together and manage the collective grief.

“The scale of the tragedy is incredibly shocking.”

A Facebook page – Children of Murray St, Manoora – has been set up and a candlelight vigil was held at Munro Martin Park at 6pm.

Anyone with information which could assist with this matter should contact Crime Stoppers anonymously via 1800 333 000 or crimestoppers.com.au.

If you are distressed or need to talk to someone, call: