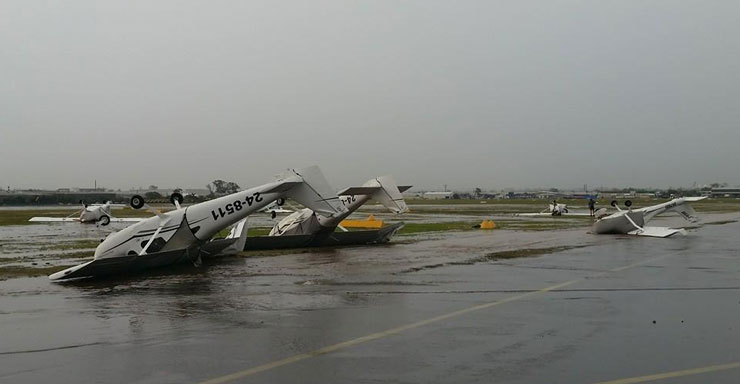 A woman has been injured by a falling tree, golf-ball-sized hail has smashed windows and strong winds have flipped aircraft as a super cell swept across south-east Queensland.

The weather bureau said two storm cells had joined to create a super cell – producing wind gusts of more than 140 kilometres an hour and large hail stones that battered windows on homes, cars and buildings.

Power was cut to about 82,000 customers across the region after the severe thunderstorm struck about 4:45pm (AEST).

The severe thunderstorm warning issued by the Bureau of Meteorology for the region was later cancelled at 8:19pm.

“The first thing that people need to do is to put your own safety first,” he said.

“Particularly that would relate to power outages or when there are powerlines that are down.”

Police have asked Brisbane residents to cancel all non-essential travel around the city this evening.

They said some emergency services were having trouble accessing certain areas because of traffic congestion.

The State Emergency Service (SES) said it had more than 1,000 calls for help after the massive storm.

“The volunteers will continue to work through the night almost with certainty,” SES Assistant Commissioner Peter Geoffrey said.

The Ambulance Service said a woman was pinned under a tree that fell at West End, in inner Brisbane.

She was treated at the scene.

Several schools around the city will be closed on Friday, with parents advised to check with their school in the morning.

Campbell Fuller from the Insurance Council of Australia said there had been thousands of claims lodged already.

“This is certainly one of the biggest storms we’ve seen in Brisbane in recent years,” he said.

Claims so far were mainly from motorists, Mr Fuller said, though he expected that to go up “rapidly” as people arrived home and assessed the damage.

The Insurance Council has declared a “catastrophe”, a rare occurrence that sees it set up a taskforce to liaise with authorities.

All Brisbane rail services were suspended during the storm and by 8pm only some services had resumed.

“We’re just working as quickly as we can to get the network up and running. We do recommend at this stage people seek alternative forms of transport,” he said.

In the city’s south, Archerfield Airport general manager Corrie Metz said four aircraft had flipped over on the tarmac during the storm.

“I’ve had hangar doors blown off their hinges,” he told 612 ABC Brisbane.

“I’ve got a couple of my staff doing some of the runway inspections. We are trying to get a hold of a number of aircraft owners that have been affected.”

There was flash flooding in many suburbs around Brisbane including at Inala, Bowen Hills, and at Roma Street in the city.

Traffic became backed up on Coronation Drive, one of the major thoroughfares into and out of the CBD, after a tree fell across lanes.

A roof was blown off a unit complex on Coronation Drive, just before High Street at Toowong.

In St Lucia, the University of Queensland’s Schonell Theatre flooded, with rain falling on the stage.

The Mater Hospital in South Brisbane said a large number of its windows were smashed by the savage wind.

The massive storm comes a week after another severe event caused chaos in Brisbane, with flash flooding trapping commuters and submerging cars.

Brisbane resident Genevieve told 612 ABC Brisbane she was stuck in a carpark she sought shelter in at the height of the storm.

“The limbs flying from the trees … was enough to frighten me into the first carpark I saw,” she said.

“The rain has just started to pick up again now.”

David from Durack also said the scene resembled a cyclone.

“I’m seeing fences bent on a 45-degree angle and a helicopter flipped at Archerfield. It was grounded, but geez, there’s so much damage,” he said.

Nick from Red Hill said 25 cars scrambled to take shelter in the carpark of the Red Hill shops when the storm hit.

“The wind was just so incredible that it was blowing the hail in under the [carpark ceiling],” he said.

Kellie was in South Brisbane and said the ferocity of the storm cell was “absolutely insane”.

“Can I tell you I did the Sydney to Hobart last year … and [the wind speed] was in excess of that, without question,” she said.

“The rains were horizontal. The howling, all the roof tiles in our building on the top floor … [it] was just remarkable.”

Check out the damage to this building from the Brisbane storm! Photo via @JessySahota @abcnews @ABCNews24 pic.twitter.com/m1FbCgH7Jo

@QueenslandRail thanks to QR for keeping us safe. This is the view fr the valley station platform pic.twitter.com/zp2MPMV2TD