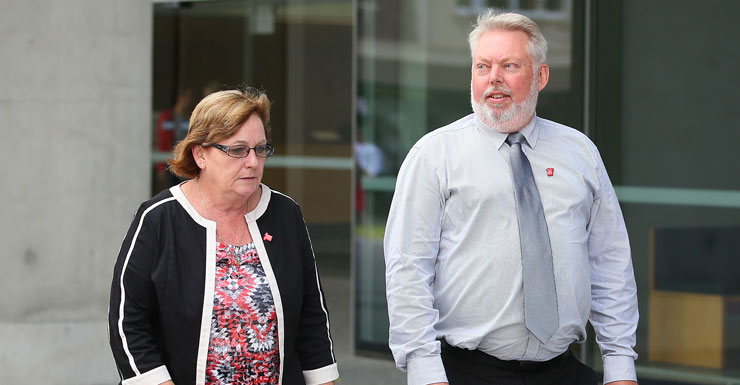 Paedophile Brett Peter Cowan, 45, is asking Queensland’s Court of Appeal in Brisbane to overturn his conviction and life sentence in jail for the murder of Daniel in December 2003.

The Supreme Court jury earlier this year heard secret police recordings in which Cowan admitted to the murder to officers posing as gangsters and led the officers to the schoolboy’s remains in the Glass House Mountains.

Cowan was sentenced to life in prison in March with a non-parole period of 20 years.

Daniel’s parents, Bruce and Denise Morcombe, have described his appeal as “a waste of taxpayers’ money”.

On Wednesday, Cowan’s lawyer Peter Davis told the court there were two grounds for the appeal and the key argument centred on Cowan’s confession.

Mr Davis said if the court allowed the confessions, but found in favour of the appellant on ground two – that the trial judge erred in her direction to the jury regarding evidence from paedophile witness Douglas Jackway – then the request was for a retrial.

“The evidence on the Sunshine Coast makes the confession more reliable – there’s no doubt about that,” he said.

He said Cowan’s taped confessions to undercover police officers posing as gangsters were not voluntary because they were made under an inducement or threat by a person of authority.

Mr Davis said police knew Cowan would not confess, so they tricked it out of him.

“If an admission is involuntary, then it’s inadmissible,” Mr Davis said.

“They knew he wasn’t going to voluntarily admit to police about that particular issue. They circumvented his right not to confess to police.

“We say here that the unfairness is in the actions taken by police in circumventing Mr Cowan’s right to silence.”

Mr Davis said based on that, if the confession was excluded, then so too should have been the evidence of Daniel’s remains being found in the Glass House Mountains.

Cowan had led the undercover officers to Daniel’s remains.

“If the evidence on the Sunshine Coast is excluded, then on the remaining evidence the jury could not convict Mr Cowan,” he said.

Cowan was not in court today and the appeal hearing was expected to last two days.

Mr Davis told the court Cowan had a series of interviews with police prior to the coronial inquest into Daniel’s death.

At the inquest, and later in covert police interviews, he made it clear he had not intended to admit to the crime.

“The question is whether the confession was induced by any threat or promise by some person in authority,” Mr Davis said.

“Here the confessions were made to undercover police officers.

“The clear message conveyed to Mr Cowan was that he had to strengthen his alibi or he’d be charged.

“We submit that comes from an accumulation of things said to him, including the inquest.

“What then happens is he’s excused from the inquest, but he’s to be recalled.”

When asked by Court of Appeal president Margaret McMurdo whether Mr Davis was suggesting the police conduct was illegal, Mr Davis stopped short.

“Even the though the police were clearly influencing the Coroner as to when the summons should be issued, we couldn’t elevate that to perverting the course of justice.”

“We can’t get away from the fact that there was powerful evidence against him.”

Speaking outside court on Wednesday morning, Mr Morcombe said the appeal was a test of the law.

“It’s a test to see whether Cowan’s guilty verdict was fair, in particular … the covert operation,” he said.

He said the trial result on March 13 seemed “so far away and yet so close”.

“But here we are – another step – let’s hope it’s another nail in the coffin,” he said.

“It’s just a matter of riding it out. It’s not somewhere where we want to be.

“Indeed the last couple of weeks we’ve spent the majority of our time visiting schools and educating kids on how to keep safe from predators and yet here we are, perhaps trying to let a predator out – pretty bizarre.”

Denise Morcombe said the whole court process was an “absolute waste of taxpayers’ money” as there was no doubt Cowan was guilty.

“Why has he got a chance to appeal? I mean know that’s the law, but it’s a waste of taxpayers’ money – honestly,” she said.

Cowan abducted Daniel while the 13-year-old waited for a bus at Woombye on the Sunshine Coast in 2003.

He drove the teenager to secluded bushland in Beerwah before choking him to death and disposing of his remains at an old sand-mining site.

The Attorney-General is also appealing against Cowan’s sentence, arguing the non-parole period of 20 years is manifestly inadequate, not in line with community expectations and will not act as a deterrent.

The police investigation into Daniel’s disappearance was the biggest in Queensland’s history.

In a victim impact statement to the court in March, Daniel’s father Bruce said he remained haunted by thoughts of how long his son was held captive and what was done to him.