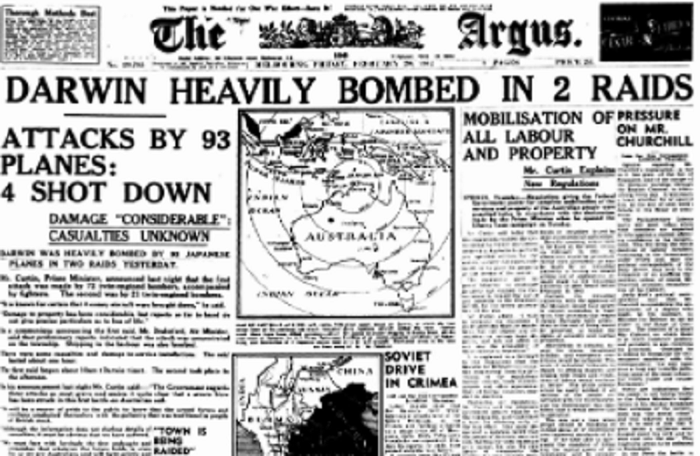 The bombing of Darwin serves as a painful reminder of the cost of war as Australia “watches with alarm” events in Ukraine, the Northern Territory’s chief minister says.

Just before 10am on February 19, 1942, a formation of 188 Japanese aircraft descended on the Top End in the first of two raids that day.

The bombing would go down in history as the largest single attack ever mounted on Australia, with more than 230 people killed and hundreds wounded.

Veterans, descendants, army personnel and members of the public have gathered on a hot and humid Saturday to mark eight decades since the World War II bombing, in a ceremony at Darwin’s Cenotaph.

At 9.58am local time, sirens blared to mark the exact time air raid sirens began 80 years ago, with a re-enactment playing out and cannons shooting clouds of red smoke as military aircraft flew by.

Speeches followed, with Mr Morrison remembering the day when more bombs dropped on “this small city of Darwin” than had hit Pearl Harbour 10 weeks prior.

“So here, in Australia’s only north-facing city, the city that engages with our neighbours and trades with the world, we remember what was, but we give thanks for the peace gifted to us,” he said.

Mr Gunner said the 80th anniversary served as a reminder of the “painful cost of war, wherever it plays out” as he pointed to the unfolding conflict in Ukraine.

“Whether hot or cold, war has been a constant part of every generation’s life for the last 80 years. Moments of enduring peace have been precious few,” he said.

“And the way things are around the world at the moment, that doesn’t look like changing.

“We watch with alarm the events in Ukraine and, as ever, tensions in our own region.”

Both Mr Gunner and Darwin Mayor Kon Vatskalis called for February 19 to be made a national public holiday.

Prior to the memorial, one of the last surviving veterans, Brian Winspear, vividly recalled when the first bombs fell from the Darwin sky “just like confetti”.

The 101-year-old, who attended the memorial, says he received shell splinters in his hand and eye during the raid as “bombs landed all around us”.

Descendants of Darwin’s Larrakia people also took part and acknowledged how Indigenous and non-Indigenous worked side-by-side to contribute to the war effort.

Elder Christine Fejo-King, whose her grandfather was in active service at Darwin Harbour, said the bombing traumatised the Indigenous community,

A remembrance and reconciliation event was being held on the esplanade as part of Saturday’s commemoration, with the descendants of both Aboriginal and non-Aboriginal service personnel sharing stories.

A message of apology from a Japanese man from Himeji to a Larrakia Traditional Owner was also being read.

Eighty years on, Darwin remembers the dark day Japan’s bombers swept in from the sea