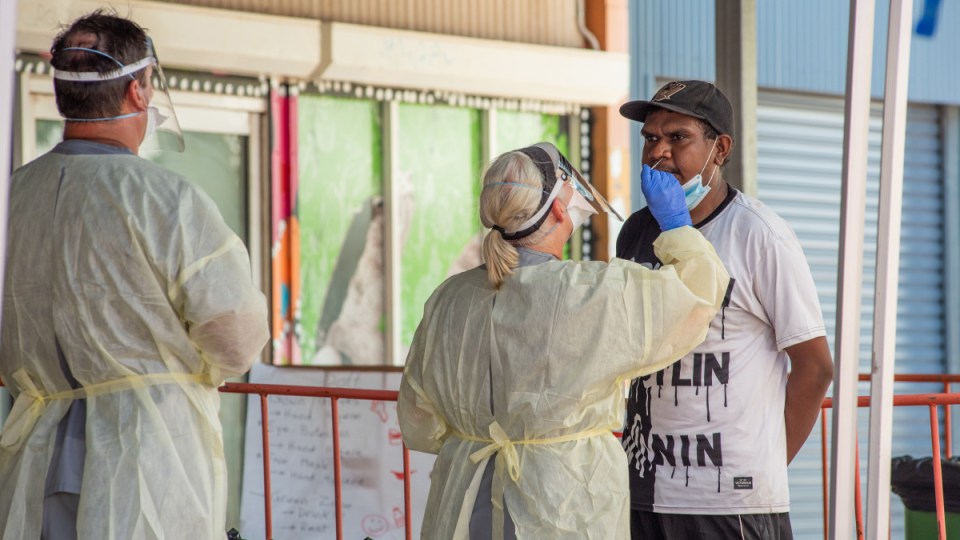 The death of a man in his 80s has taken the Northern Territory's COVID-19 toll to 16. Photo: AAP

Coronavirus cases have surged again in the Northern Territory as the region moves to cut the wait time for booster vaccines to three months.

Cases from Thursday were also revised up from 626 to 747.

Mr Gunner said the spike in cases was mainly in Darwin as more families returned home from interstate holidays.

“It’s not surprising and we can expect that to continue for a few days to a week,” he said.

“This doesn’t change our overall settings for the Territory, it just means it’s more important than ever to stick to the measures that keep us safe.”

Mr Gunner said from Monday the government would cut the interval for vaccine boosters and impose deadlines for high-risk workers to have their third jabs.

Anyone working in a high-risk setting such as a hospital, an aged care centre or in correctional services must have their booster by March 11 or within four weeks of becoming eligible.

All other workers covered by vaccine mandates will have until April 22 to get boosted.

As well as Friday’s increase in cases, hospitalisations also jumped from 95 to 105 with three people in intensive care.

Active infections across the Territory rose to 4200.

Mr Gunner said the Territory’s hospital system still had adequate capacity and could take more steps, such as cuts to elective surgery, to increase it further.

“We’ve got more ICU beds available than we’re currently using and we’ve got the ability to surge as well,” he said.

“We want to make sure we keep our caseload within the capacity of our current hospital system to deal with.

Among Territorians in hospital with COVID-19, the vast majority are Indigenous Australians as outbreaks also continue to rise in outback communities.

Mr Gunner also announced on Friday that the central Australia community of Ampilatwatja would go into a 48-hour lockdown after several cases were recorded there.

He said the community had a very low vaccination rate.

Acting deputy chief health officer Marco Briceno said the higher rate of infections in outback communities was driven by the lack of adequate resources to manage coronavirus patients in their local areas.

Those resources were generally centralised in major hospitals.

“What we would like to see, and we are already seeing some signs of, is that we will build capacity in our remote hospitals and remote primary health care clinics to provide that care closer to home,” Dr Briceno said.

“We hope that then the number of Indigenous Territorians in hospital will be the same as we see at any given time.

“We need to engage with community leaders and community members and healthcare organisations to see what’s possible.”

From Friday the Territory also revised how close contacts of COVID-19 cases are notified, with the information to be included in the check-in phone app rather than provided by individual text messages.