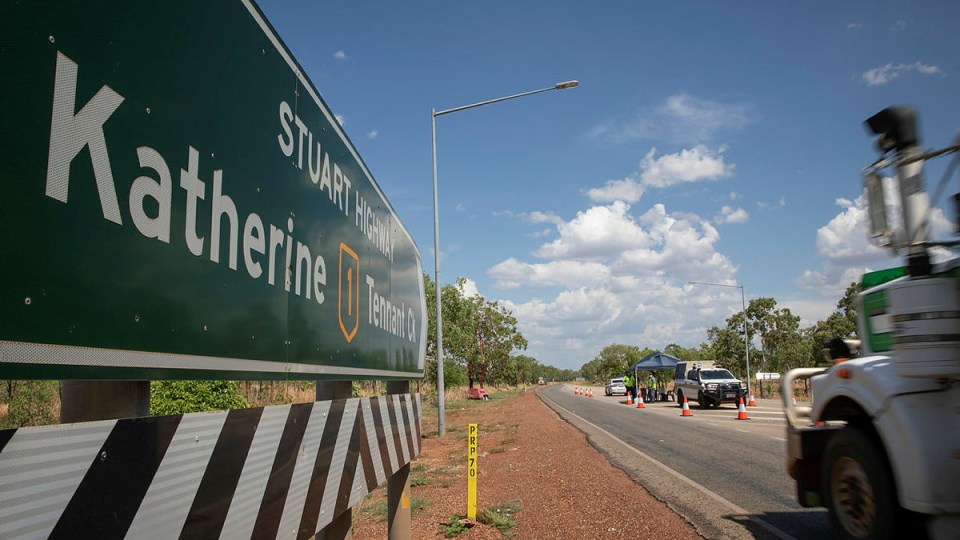 ADF members and NT police at a vehicle control point on the Stuart Highway. Photo: ADF

Chief Minister Michael Gunner has urged people to ignore the “ridiculous rumours” and “insane crap” about the military’s support role amid a 52-case outbreak that has infected mostly Aboriginal Territorians.

He said ADF personnel were carrying fresh food for locked down communities and vulnerable people, not guns.

“Ninety-nine per cent of the BS that’s flying around the internet about the territory is coming from flogs outside the territory,” he said on Thursday.

“People who have nothing better to do than make up lies.”

There was one more COVID case in the NT on Thursday – in someone who is already in isolation.

Mr Gunner said hundreds of health workers, police, military personnel and NGO staff were working around the clock to stop the outbreak spreading.

“We are trying to protect the oldest continuous living culture on the planet,” he said.

“We have tens of thousands of years of history, law, custom and song to keep alive.

“If anybody thinks we are going to get distracted or intimated by tinfoil hat-wearing tossers sitting in their parents’ basements … then you do not know us Territorians.”

The misinformation alleges infected Aboriginal people are being forcibly transferred to quarantine facilities while likening them to the stolen generation.

Some traditional owners also accused ADF personnel of holding down people in some Indigenous communities and injecting them with the vaccine.

The posts have been shared and reposted to multiple platforms and there are fears their contents could threaten efforts to contain an outbreak.

The ADF has also hit out at the accusations, saying they are “lies”.

“Defence is aware of social media posts claiming the Australian Defence Force is forcibly vaccinating or detaining members of the Australian community,” a spokesman said in a statement.

“These claims are emphatically false.”

Colonel Tim Rutherford, the ADF’s NT COVID-19 response commander, said the posts were made by “issue-motivated” groups using Defence’s involvement as a “prop”.

“The claims are wild and various … they’re thoroughly untrue,” he told the ABC.

“On the ground the people in the communities have been great and understand we’re there to support them, to keep them safe, protect country, families and communities,” he said.

About 85 ADF personnel are assisting police and health workers in and around the Katherine area, 320 kilometres south of Darwin, with food deliveries to vulnerable communities and close-contact transport to testing facilities.

They are also helping police at vehicle checkpoints.

Traditional owners in Binjari and Rockhole, 330 kilometres south of Darwin, have also weighed in, saying the battle against the virus is the “biggest fight of their lives” and the social media posts are not helping.

“We have been treated with a lot of respect and appreciate all the support being given by these support personnel,” the Wurli-Wurlinjang Health Service said.

“We don’t need people out there creating another flood for us. We don’t appreciate outside people making comments that are untrue.

“People on social media saying that our people are being mistreated need to realise their comments are hurting the very people they claim to care about.”

Wastewater testing around the outbreak area of Katherine continues to be positive but the results are weakening.

Rockhole residents have tested negative for the virus and the Aboriginal community will move from a hard lockdown to a normal lockdown.