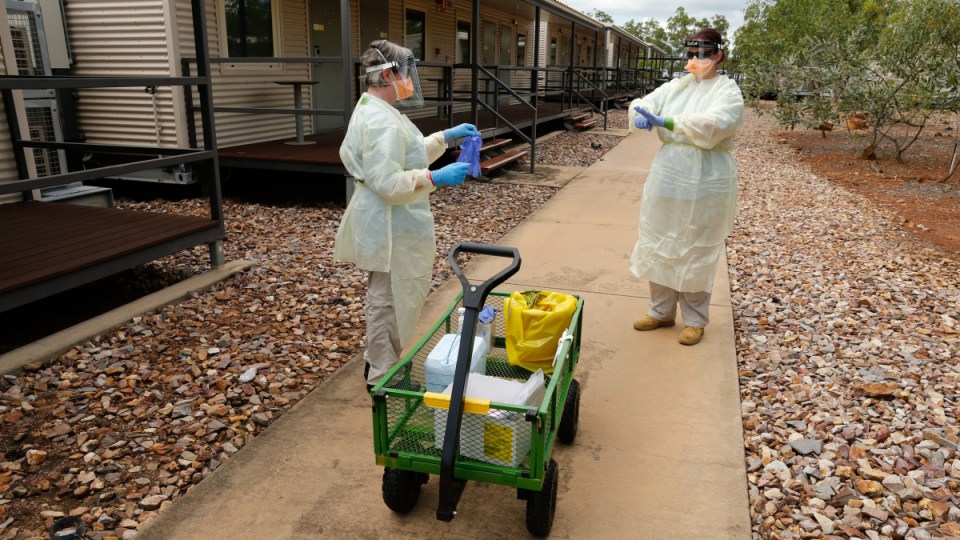 It brings the current outbreak to 37 cases after a 33-year-old woman and 67-year-old man in Katherine were diagnosed with the virus on Monday.

A lockdown in Katherine, 320km south of Darwin, has been extended for two days until Wednesday at 6pm.

Restrictions have eased in the Aboriginal community of Robinson River, 800km east of Katherine, where the lockdown is now a lockout of unvaccinated people

The new infections come as the NT relaxes some of its border rules for fully vaccinated travellers from areas where the virus is present.

They are now permitted to quarantine at home for seven days so long as they follow new testing guidelines and return negative results.

A ban on most unvaccinated arrivals has also taken effect, regardless of what jurisdiction they have travelled from.

“But we appreciate the patience of everyone at the airports today as this new phase begins.”

It comes after nine new cases were detected in Binjari, about 330km south of Darwin, on Saturday.

The tiny Aboriginal community of about 190 was ordered into an extreme lockdown along with the neighbouring Rockhole, where about 100 people live.

Residents in the districts surrounding the two communities and nearby Katherine have been ordered to wear face masks in most public places.

The Australian Defence Force has also been called in to help transfer positive cases and close contacts to the Centre of National Resilience at Howard Springs, just south of Darwin.

The outbreak was triggered by an infected woman who illegally entered the NT in late October.

The 21-year-old lied on her border entry form before travelling from Cairns to Darwin after visiting Victoria, where she had contracted the virus.

She infected a man in Darwin before the virus spread to Katherine, then Robinson River and Binjari.

Residents in Binjari and Rockhole can only leave their homes in an emergency or for medical treatment.

Meanwhile, unvaccinated travellers will no longer be able to enter the NT from Monday, under sweeping changes to the territory’s border rules.

The only exception will be essential personnel, some compassionate grounds and Territorians returning from jurisdictions where COVID is not present, called green zones.

Fully vaccinated arrivals from red zones where the virus is present will be able to quarantine at home for seven days.

But they will need to have a rapid antigen test upon arrival in the NT and return a negative PCR test within 72 hours.

They will also have to get re-tested five, eight and 14 days after leaving quarantine and stay in a high-vaccination zone away from aged care facilities and remote communities.

The home quarantine requirement is scheduled to end on December 20 with rapid antigen testing extended to all arrivals.