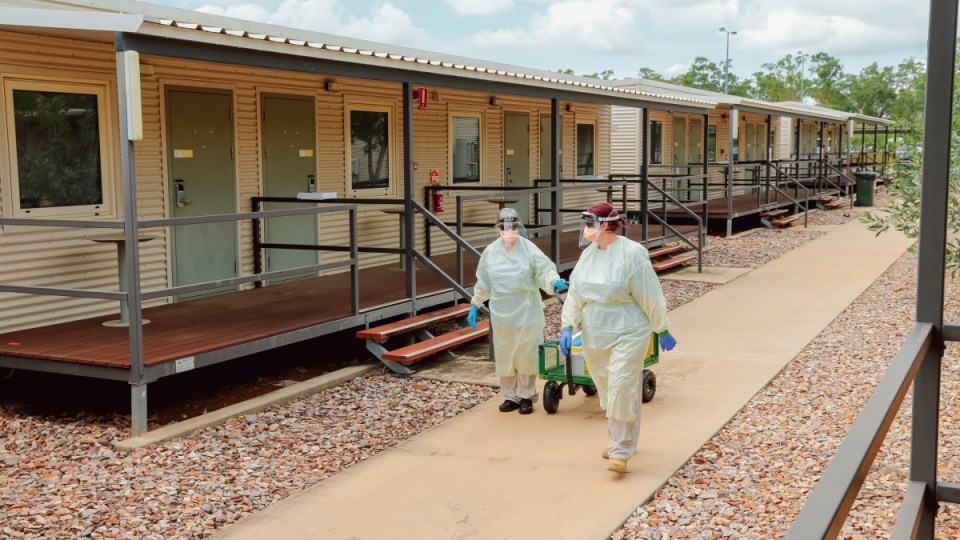 The latest NT case, a man diagnosed after arriving from Africa and sent immediately to Howard Springs, is stoking fears the mutant Omicron strain is already amongst us.

Health authorities in the Northern Territory are scrambling to manage a growing COVID-19 outbreak that has spread to remote Indigenous communities.

The outbreak has grown to 35 after nine people from the Binjari community, 320 kilometres south of Darwin, were diagnosed late on Saturday.

No further local COVID-19 cases were detected on Sunday, but contract tracers have identified 385 close contacts from the latest cluster, according to the NT government.

Of these, 374 have been contacted and are isolating while 314 have tested negative.

Unvaccinated travellers are no longer able to enter the NT under sweeping border rule changes that begin on Monday.

The only exception will be essential personnel and Territorians returning from jurisdictions where the virus is not present, called green zones.

Chief Minister Michael Gunner said a 78-year-old woman from Binjari was being treated in Royal Darwin Hospital, while the other eight cases – five men and three women – have been taken to the Howard Springs quarantine centre.

The 78-year-old woman was in a stable condition. It is understood the nine are from different households.

Mr Gunner said more infections should be expected in Binjari and lockdown arrangements for nearby Katherine and Robinson River were likely to remain for several weeks.

“What has become clear to us based on the level of movement that has been happening in some communities outside of Katherine, is there is a real risk the virus has reached the connected communities further away,” he said on Saturday.

More health staff have been sent to Binjari to carry out COVID-19 tests and vaccinate members from that community, and nearby Rockhole.

The Australian Defence Force has been called in to help with transferring positive cases and close contacts to Howard Springs.

Sewage tests have come back negative for 11 catchment sites in Katherine, but there were positive results in the Binjari site and the Bicentennial Road catchment site, the NT government said on Sunday.

All residents in Katherine East are being urged to get tested for the virus immediately.

The latest outbreak was triggered by a 21-year-old infected woman who illegally entered the NT in late October after contracting the virus in Victoria and lying on her border entry form.

Under the new border rules, fully vaccinated arrivals from red zones where the virus is present will be able to quarantine at home for seven days but will need to have a rapid antigen test upon arrival and return a negative PCR test within 72 hours.

They must also get re-tested five, eight and 14 days after leaving quarantine and stay in a high vaccination zone away from aged care facilities and remote communities.

The home quarantine requirement is scheduled to end on December 20 with rapid antigen testing extended to all arrivals.