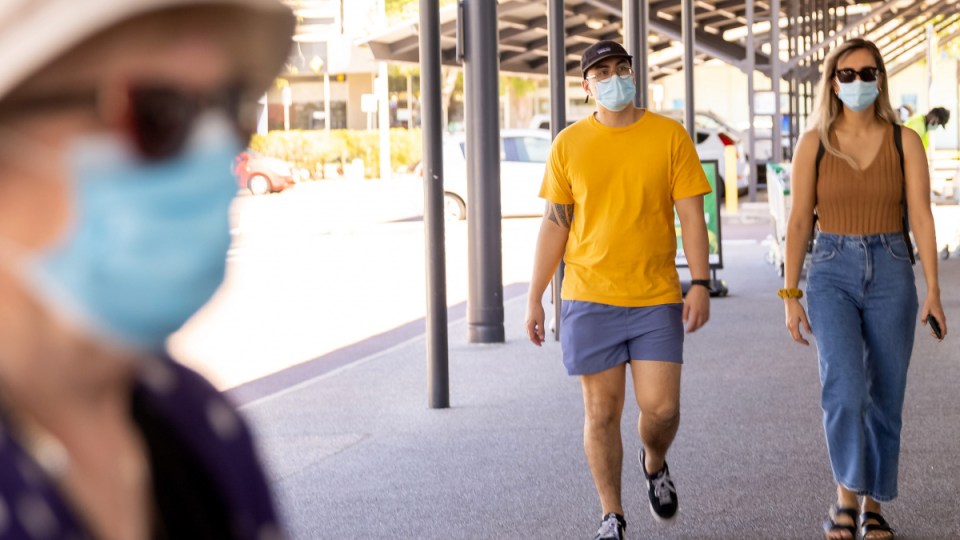 Masks will be required across the Territory until at least Monday, following the rapid growth in the COVID clusters. Photo: Getty

Alarm is growing in the Northern Territory, after it confirmed nine new coronavirus cases on Tuesday, bringing the total number in two worrying outbreaks to 11.

The outbreaks are in Katherine, about 320 kilometres south of Darwin, and the remote Indigenous community of Robinson River.

It is the highest daily number of cases in the NT since the pandemic began.

All of Tuesday’s cases were in Katherine. They are Indigenous Australians and household contacts of two cases confirmed on Monday that triggered snap lockdowns in both communities.

They include a 65-year-old woman who has been admitted to the Royal Darwin Hospital. The others range in age from 71 to five-year-old twins – all have been moved to accommodation at Howard Springs.

“This is obviously a serious escalation in the COVID-19 situation in the Northern Territory,” Chief Minister Michael Gunner said.

The update came as Senator Malarndirri McCarthy revealed her sister was the infected woman who carried the virus into the remote Robinson River community.

The lockdown order for Katherine, which had been scheduled to end on Thursday night, has been extended until next Monday.

Mr Gunner said masks would be required across the Northern Territory until Monday.

“All Territorians have a call to action,” he said.

“There is a chance the virus has seeded and moved. I need all symptomatic Territorians to get tested. We want to see a testing response across the territory.

“There will be daily waste water testing in Alice Springs, Tennant Creek, Katherine and Darwin. I provide a warning today, a positive wastewater result in one of these locations may be enough to trigger a lockdown or lockout decision.”

Contact tracers have so far identified 161 close contacts. There are also several exposure sites, including Katherine Hospital and the McFarlane Primary School in Katherine.

So far, no more cases have been diagnosed in Robinson River, where Senator McCarthy’s sister had travelled to and was diagnosed.

Hers is the first COVID-19 infection reported in a remote NT Aboriginal community.

“I’d like to say a personal message and that is to my sister, who is the source of the COVID infection in Robinson River – our thoughts and prayers are with her and our family,” Senator McCarthy said.

Health teams have been sent to Robinson River and surrounding communities for a testing and vaccine blitz.

About 350 people live in the community, with 77 per cent fully vaccinated and 87 per cent have had their first dose, according to NT Health.

“We have enough tests to test the whole of that community. We are under no illusions that the risk there remains real and there is more testing to do there today,” Mr Gunner said.

In Katherine, about 75 per cent of people have had both COVID doses. Mr Gunner urged people to come forward for vaccination and testing.

“We still have time for people to be vaccinated before COVID becomes a reality in your community,” he said.

“As I have said before, you only have two choices – catch COVID vaxxed or catch COVID unvaxxed. Please, please, get the vax.”

Deputy chief health officer Charles Pain said authorities were in a “desperate race” to trace any other positive cases.

“We clearly can see what the potential is in Katherine and beyond
Katherine, Robinson River and other parts of the territory,” he said.

“We are reliant, very largely, on our community to come forward and get tested, help us.”

Authorities are also working to determine if the new clusters are linked to an outbreak in the Territory earlier in November. But, if they are linked then the gap between the last case in that cluster on November 4 and the first in the Katherine outbreak on November 13 becomes another concern due to fears of the virus’ spread.

Alarm in the NT as Indigenous virus clusters surge