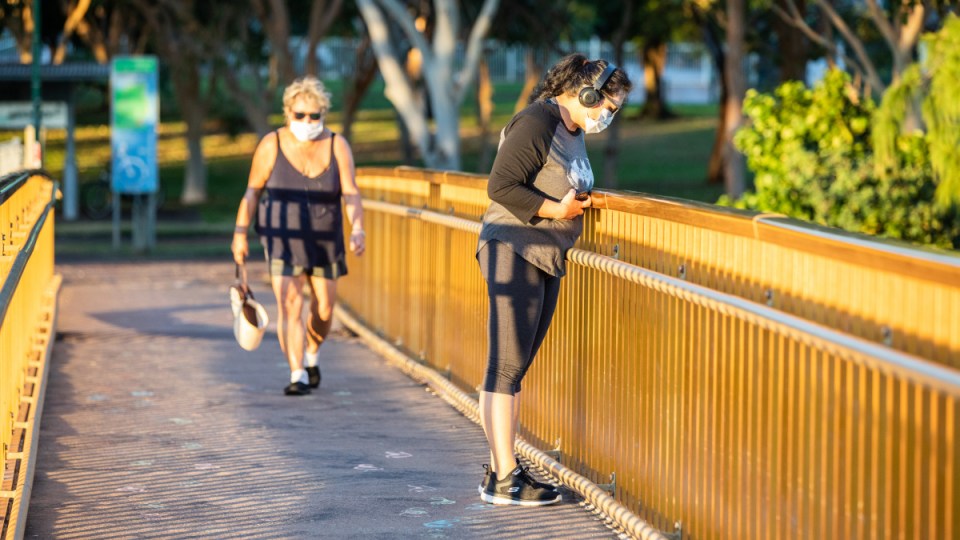 Territorians in most locations are once again free to go about their business without masks. Photo: Getty

The Northern Territory has a new COVID-19 case after a man travelled from NSW to Darwin and tested positive.

Dozens of close contacts have been identified in the community, with Health Minister Natasha Fyles fronting the media to put to bed rumours about a lockdown.

The fully vaccinated 53-year-old man flew to Darwin International Airport from Newcastle via Brisbane on Friday on Jetstar flight JQ674.

“Everyone on that flight would have been wearing masks,” Ms Fyles said on Monday.

“There is very little risk to our community.”

The man tested positive for COVID-19 on Sunday and is now at the Centre for National Resilience in Howard Springs, near Darwin.

Contact tracing is underway, with 24 close contacts identified so far.

All have been contacted and ordered to undertake 14 days mandatory quarantine.

This includes two border entry staff and two Australian Defence Force members, who have also been deemed to be close contacts and ordered into quarantine.

The remaining 111 people on the flight from Queensland have been identified as casual contacts and ordered to self-isolate and get tested for the virus. The man’s infection has also sparked a scare at Brisbane Airport, where he spent several hours in transit on September 17.

Ms Fyles said the man had spent no time in the community and travelled directly from the airport to Howard Springs.

A 29-year-old woman has also tested positive after arriving in the NT on a repatriation flight from Pakistan on Friday.

The woman is also quarantining at the Centre for National Resilience.

It comes as the NT gears up to roll out the Moderna COVID-19 vaccine, with the first supplies set to arrive this week.

More than 73 per cent of Territorians have received their first COVID-19 jabs and 56 per cent are fully vaccinated.

Territorians aged 12 to 15-years-old have been leading the charge, with 20 per cent of the cohort receiving their first dose in recent weeks.

The vaccination rate isn’t looking so good in remote areas with only 55 per cent of residents given their first dose and 37 per cent fully vaccinated.

In some Central Australian and Barkly region communities less than 10 per cent of the population have received their first dose as pockets of vaccine hesitancy persist raising concerns for the vulnerable Aboriginal residents, many of whom suffer from chronic health problems

The NT government said it would release weekly updates about the remote vaccination rollout but just two weeks after making the promise, its website is displaying data from September 8.

Meanwhile, the NT has announced $5 million in discounts for vaccinated interstate holiday makers from October 1.

Fully vaccinated travellers can save on flights, accommodation, tours, attractions and vehicle hire, with a $200 discount for every $1000 spent.

Under the NT’s COVID-19 roadmap, which was announced last week, vaccinated travellers from virus-affected areas will be able to enter the territory once 80 per cent of NT residents are fully vaccinated.

This is projected to happen in early November after the NT launched a six-week vaccination blitz.

New COVID case for Darwin, but no lockdown