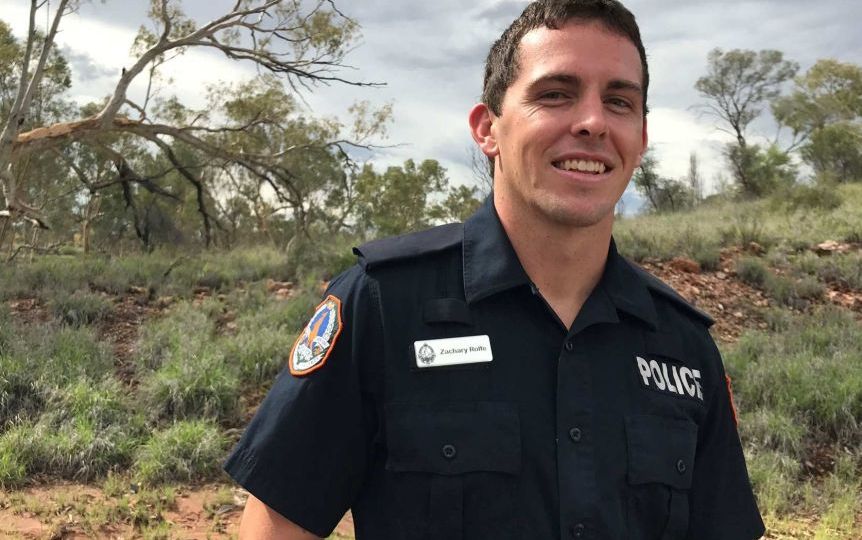 Constable Zachary Rolfe was in Canberra for a High Court application over his defence. Photo: ABC News: Grenville Turner

A Northern Territory policeman’s long-awaited trial for allegedly murdering an Indigenous man during an outback arrest has been postponed due to COVID-19.

Constable Zachary Rolfe, 29, is accused of murdering Kumanjayi Walker, 19, who was shot three times during an arrest in the remote community of Yuendumu in November 2019.

Constable Rolfe was supposed to stand trial in the NT Supreme Court on Monday but the Crown’s interstate prosecution team hasn’t been unable to travel to the Top End.

Philip Strickland SC and Sophie Callan SC are stuck in NSW where 124 new local Delta variant cases were recorded on Thursday and a lockdown in greater Sydney continues.

Acting Justice Dean Mildren adjourned the trial to a future date yet to be fixed, presumably when the NSW outbreak is contained.

“This is because prosecuting counsel has been affected by COVID-19 travel restrictions and are presently unable to make their way to Darwin,” a court spokesman said on Thursday.

A week-long pre-trial hearing has been held using an audio-visual link so Mr Strickland and Ms Callan SC could appear.

A heavy police presence was rolled out around the Supreme Court during the pre-trial hearing.

“The heightened presence is related to the trial but operational details will not be shared,” NT Police Force commander Matthew Hollamby said in a statement.

“We acknowledge that this will be a difficult time for some members of the community and police will maintain a focus on community safety.”

The lead-up to the trial was accompanied by colourful scenes during multiple pre-trial hearings.

Constable Rolfe’s defence lawyer, David Edwardson QC, accused NT Police Force Commissioner Jamie Chalker and Assistant Commissioner Nick Anticich of “burying” reports about the constable because they were allegedly inconsistent with the case police wanted to present against him.

The reports became the subject of much courtroom debate with Mr Edwardson saying he should have been made aware of their existence earlier.

His attempts to gain access were initially rebuffed with Mr Chalker allegedly resisting requests to hand them over on the basis the defence could not demonstrate legitimate forensic purpose.

Redacted versions were ultimately handed to Mr Edmondson after a subpoena was issued.

The parties then argued over the extent of the redaction, which was made on the basis of legal professional privilege.

Justice Mildren eventually made orders for some of the redacted material to be made available to the defence team.

The trial was expected to run for four weeks in Darwin, which is about 1500 kilometres from Yuendumu.