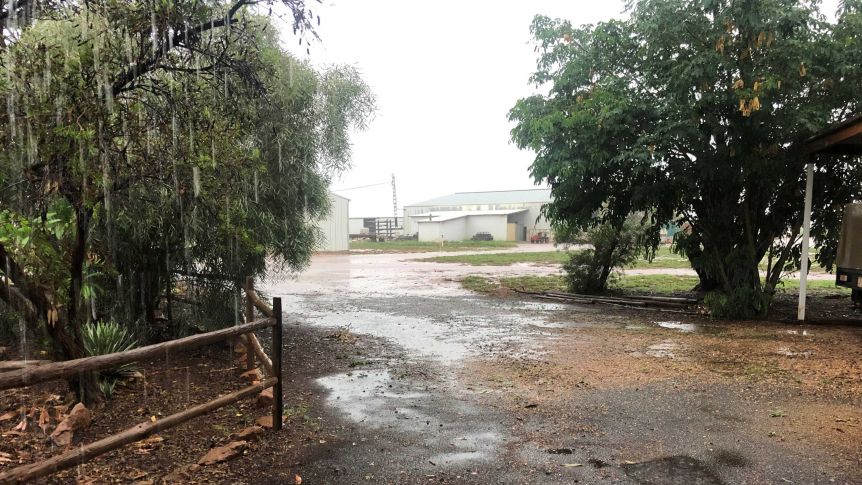 Juliet Barsden, meteorologist with the Bureau of Meteorology in Darwin, said this year’s Christmas Day forecast is for 26 degrees, a staggering 19.7-degree difference between this year and last.

“We’re not looking at a significant chance of rain at this stage,” she said.

“We’re expecting partly cloudy conditions, with a minimum of 15 and a maximum of 26 degrees.

Ms Barsden said the recent rain events were thanks to an early monsoon, triggered by the La Ñina event, that has cooled down the region.

“The rain has come from a cloud band, fed by tropical moisture from a slow-moving tropical low over the Kimberley,” she said.

At the beginning of the Christmas week, Territory Grape had the highest rainfall recorded with 181 millimetres, Gemtree Park received 125 millimetres and Rabbit Flat had 109 millimetres.

Ms Barsden said the Christmas Day forecast was expected to be well below average.

“The average maximum temperature is 35.9 degrees. The average Christmas night is 20.6,” she said.

Christmas present from above

Northern Territory pastoralist Roy Chisholm lives 200 kilometres north of Alice Springs at Oolloo farm between the roadside townships of Ti-Tree and Aileron. He welcomed the rain and the cooler temperatures.

“I’ve got a jumper on. I’m nice and warm and catching up on paperwork,” he said.

Earlier in the week, the farm recorded 180 millimetres of rain.

“What a great Christmas present,” he said.

Mr Chisholm remembered Christmas 2019 as hot and dusty: “It was disgusting”.

“For the people who have had rain, it brings heart back into the people and to the country,” he said.

Despite selling the last of his droughtmaster cattle three weeks ago he said: “I know what a great feeling it is when it does rain”.

“I feel a great joy for the pastoral community,” he said.

Mr Chisholm said he was “cow-less” for the first time in his working life.

“I am pretty empty. It’s like losing a finger,” he said.

‘A great Christmas present’: Alice Springs is in for one of the coolest Christmases on record