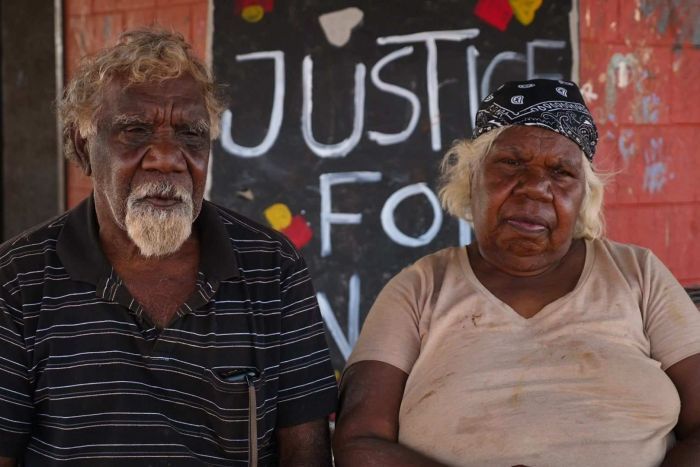 Eddie and Lottie Robertson raced to the aid of Kumanjayi Walker when they heard he had been shot. Photo: ABC

The couple who raised Kumanjayi Walker say the laughter is “all gone” as they plead for justice for the Indigenous teen’s death.

Simmering tensions between the Northern Territory’s Aboriginal community and police are threatening to boil over as the officer accused of murder, Zachary Rolfe, 28, on Thursday flew to Canberra.

He has been accused of shooting the teen but the police union said the former Afghanistan veteran and dux would plead not guilty and “vigorously defend” the charge.

The constable, who has been suspended with pay, was released on bail and left the NT for Canberra where his parents live.

The 19-year-old’s death has sparked calls for a ban on police carrying guns in the remote Yuendumu town, 300km from Alice Springs, where they say the people do not own such weapons.

The officer’s release from custody has also been questioned while one of the victim’s family members called for tribal justice.

“We do not want guns in Yuendumu as from now,” Walpiri elder Ned Hargraves told the ABC.

Another senior elder, Harry Nelson, said he feared the presence of guns could incite fear among children.

“That’s what my main concern is — frightening children. Guns should only be worn if there is a major problem in the community,” he said.

However there is also anger among some rank-and-file police officers over the laying of a murder charge against Constable Rolfe so quickly, with speculation it was politically motivated and done to appease protesters.

Indigenous Affairs minister Ken Wyatt flew to Alice Springs where he met with the community and called for calm as thousands protested, many travelling from remote communities.

Mr Wyatt said now was not the time for blame.

“I understand people want answers. The incident is now subject to a judicial process as it should be.

“Now is not the time for blame. Now is the time to care for those that need it most in the community.

“It is time for compassion.”

The couple who raised Walker, Eddie and Lottie Robertson, said they had wanted to give the young boy the “love he missed out on” when they took him into their care.

The boy was in his bedroom when police sought him on Saturday night for breaching the terms of his release from prison where he had served eight months for property and stealing offences.

When the couple heard the news he had been shot, they raced to the property where they said “we lost him”.

By 9pm he was dead but family and friends gathered outside the police station, where his body was in custody, were not told until the next morning, sparking anger that they had been denied access to the dying man.

The officers had body-worn cameras, footage from which has been viewed by police internal investigators.

NT Chief Minister Michael Gunner said his priority was a healing process for the community.

“The community of Yuendumu is in a lot of pain right now. It is a priority that they are supported to return to normal, to make sure kids are going to school, they have the healthcare they need, they are receiving critical services,” he said.

Constable Rolfe will plead not guilty and is due to return to face court in Alice Springs on December 19.