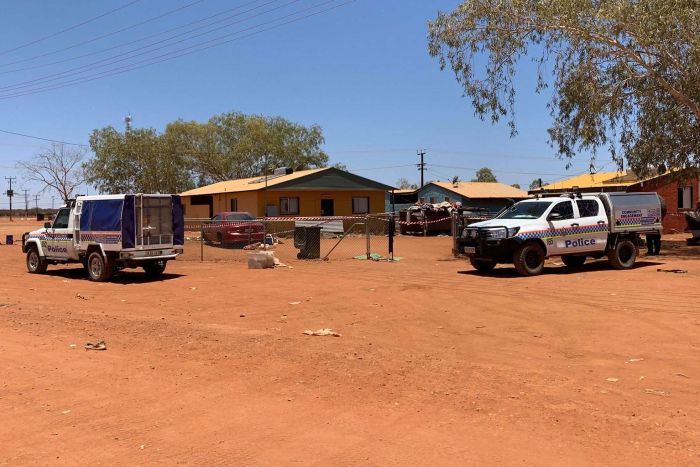 The crime scene in the wake of the Yuendumu police shooting. Photo: ABC

Women wailed and a crowd chanted “justice for Walker” on Tuesday evening as Yuendumu residents marched back to the police station where a 19-year-old man shot by an officer died at the weekend.

Residents held banners reading “Black Lives Matter” and “We Stand with Walker” as they stood where they had waited for news about Kumanjayi Walker’s condition on Saturday night.

Police officers stood by the station’s front doors as community members then moved in with leafy branches used to ceremonially “sweep” the site.

Senior Warlpiri elder Warren Japanangka Williams said the relatives had been unable to perform the important ritual after Kumanjayi’s death on Saturday.

It was very rough case at the time so this is a proper way to actually finish it off.’’

He added: “That way everybody gets a chance, they know they’ve gone through a ceremonial process.”

Outside, the walls of the police station became covered with blood-red hand prints in a statement Mr Williams said was organised by some of the community’s young people.

Senior police officers who travelled to Yuendumu after the shooting stood with the crowd, metres from young men wearing singlets scrawled with “Racist NT Police.”

Mr Williams was appreciative that police opened the station for the ceremony to occur.

He said he was also grateful for the support of people outside Yuendumu who were calling for accountability.

“I just want to say that, right around the world, I thank you all for standing with us,” he said.

Yuendumu community have marched peacefully to the police station after a public meeting. Police have opened station so locals can conduct smoking ceremony inside. Hundreds spilling through the doors. pic.twitter.com/lwAA7ghj4Y

Commissioner Chalker told a public meeting afterwards that he felt the community’s sorrow.

“I’ve met Kumanjayi’s grandfather and I’ve promised him that we will get to the truth,” he said.

Mr Gunner said the senior elders wanted assurances of an independent investigation and told the meeting that the coroner’s inquiry would have “consequences”.

Mr Gunner said he could not promise the coronial inquest would be held in Yuendumu but Commissioner Chalker said the coroner would visit the community.

The Commissioner also urged any community members who wanted to share information but were uncomfortable engaging with police to speak to the North Australian Aboriginal Justice Agency.

Elder Warren Japanangka Williams said many still had “unanswered questions” despite the leaders’ visit, saying: “it remains in our hearts.”

“We lost our grandson just because of hate, racism you know—big shame on this mob,” he said.

Significant upset was directed at health workers who fronted the public meeting, having returned after leaving the community on Saturday morning.

The departure left the Yuendumu health clinic unstaffed when Kumanjayi Walker was shot.

One nurse told the crowd she knew it was wrong to leave and was sad, and said staff had not had a say in their evacuation.

A health department representative said the decision to send staff to Alice Springs over the weekend was taken after break-ins to workers’ homes that had made them feel unsafe.

In Darwin on Tuesday, the Independent Commissioner Against Corruption, Ian Flemming QC, released a statement confirming he had received a formal report from police “for the purposes of independent, external oversight.”

He said he expected “open and unfettered” access to all relevant material.

Both NT Police and the Northern Territory Police Association issued statements on Tuesday regarding comments about the shooting and the identity of the officer involved on social media.

Police Association president Paul McCue said “irresponsible language” about the officers involved was “disrespectful to them and their families” and that the formal investigation process had to be respected.