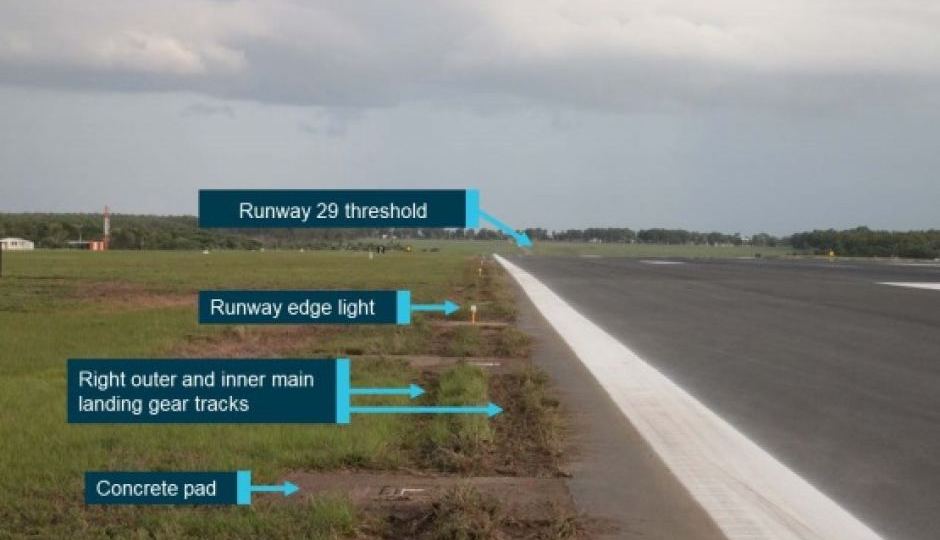 The arrows show where the passenger plane veered from the sealed part of the runway. Photo: ATSB

A national safety regulator has renewed calls made 16 years ago for more runways lights at the Darwin International Airport after a passenger plane veered from the runway – but operators have declined to say whether they would take the advice on board.

On December 6, 2016, a Virgin Australia Boeing 737 deviated more than 20 metres from the centre line of the runway in Darwin – the nation’s widest without centreline lighting – as it landed.

This was despite the Australian Transport Safety Bureau (ATSB) advising the lighting should be installed after an aircraft veered from the runway in 2003, and again after a heavy landing in 2008.

An ATSB review of the 2016 incident, released on Wednesday, included a call for more lighting to be installed, pointing out that the International Civil Aviation Organization (ICAO) recommended – but did not mandate – the installation of centreline lighting on wider runways.

“No similar occurrence has happened at any other of the busier airports in Australia, where the runways are either narrower, or are a similar width but with centreline lighting,” it said.

Darwin Airport is a joint military and civilian facility.

The Department of Defence owns much of the airport infrastructure, including the runways, while Darwin International Airport operates the civilian sections.

The ATSB report stated that both parties told it the installation of centreline lighting would “be considered during any future runway works”.

A Darwin Airport spokesperson told the ABC that “given Darwin International Airport is a joint-user airport and shares airfield facilities with the RAAF Base Darwin, it is not appropriate for us to provide comment on this issue”.

The Department of Defence told the ABC it would consult stakeholders before commenting.

In 2010, the ATSB said the department estimated the cost of the extra lighting would be $3 million, but said additional costs might ensue because of the incompatibility of some military aircraft with centreline lighting.

‘A particular challenge for aircraft’

While there were no injuries and only minor damage to infrastructure during the Virgin Australia landing in 2016, six runway lights were destroyed before the plane returned to the runway.

The ATSB noted that a relatively small increase in crosswind had occurred at a critical time before touchdown and the crew was not aware how far the aircraft had deviated.

“A wide runway without centreline lighting, such as at Darwin, poses a particular challenge for aircraft making approaches in darkness and heavy rain,” ATSB executive director of transport safety Nat Nagy said.

“In these circumstances centreline lighting greatly helps flight crews align the aircraft with the runway.”

Of the two runways wider than 50 metres in Australia, Darwin’s runway is the only one without centreline lighting.

In response to their investigation, Virgin Australia and Darwin Airport advised flight crews about the risks involved flying into Darwin in dark, wet conditions.