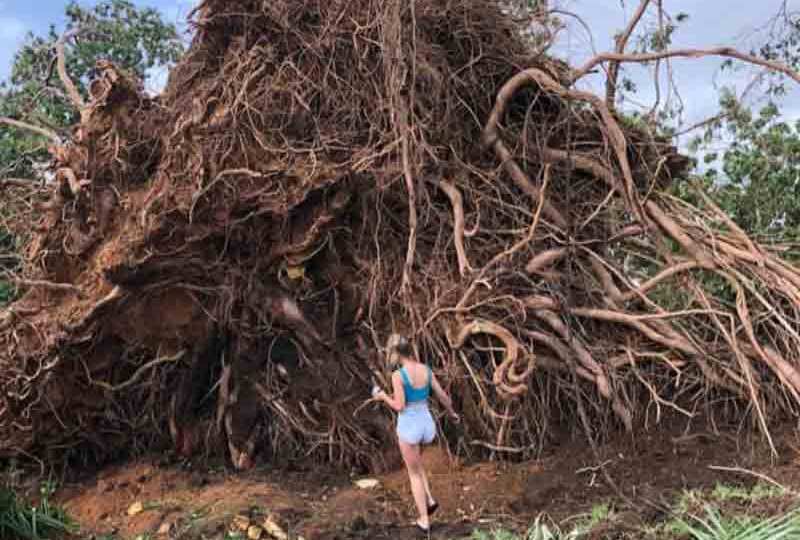 Schools across Darwin will close on Monday as emergency services work to restore power and water in the wake of Tropical Cyclone Marcus.

Forecasters described the category-two cyclone as the strongest in 30 years, which left more than a third of Darwin properties without power.

On Sunday morning, Tropical Cyclone Marcus hit the Kimberly coast near the remote community of Kalumburu as a category-two system.

It was announced Sunday morning that schools across Darwin, Palmerston, and the rural area would be closed on Monday as a precautionary measure, as well as all three Charles Darwin University campuses.

The public service will work on a skeleton staff.

There are 60,000 properties across Darwin, and 23,000 still have no electricity; residents will have to wait until at least Wednesday to get reconnected, and for some, it could take a week.

Batchelor and Adelaide River were also affected by outages.

More than 500 reports have been received of trees on power lines and fallen power lines, and hundreds of large trees have been strewn across roads, blocking access to many of Darwin’s streets.

Power and Water said crews from Alice Springs and Katherine were being deployed to Darwin to help restore power to the region.

Traffic lights across Darwin also remain out, so drivers were urged to take caution on the roads.

Residents have been urged by the Health Department to drink bottled water or boil water and let it cool before drinking or using for cooking or oral hygiene, as it may be contaminated.

Power and Water says extensive tests of Darwin’s water system would begin on Sunday, but it could take 48 hours to get the results.

Telstra said 2000 fixed-line services had been disrupted in Darwin and surrounding areas.

Homes have been trashed and rivers and creeks have risen, cutting off some isolated communities.

A flood watch is current, with possible rainfalls of up to 150mm over the next 24 hours.

Meanwhile at Bunnings in Darwin, chainsaws and generators had sold out.

Surveys of the damage to the Top End are still preliminary and it will be days before the total cost of repairs will be known.

Residents have been urged to be patient and to avoid travelling across the city as hundreds of emergency personnel, police, essential services staff and the Defence Force clear the streets from today.

Crews worked through the night to reopen roads to Darwin’s critical infrastructure like the hospital and airport.

Those using generators should make sure the area was ventilated.

He also advised people to stay away from waterways and not to drive through floodwaters.

Chief Minister Michael Gunner commended the region on its community spirit, but noted some “may have got a bit complacent” in their preparations.

“We want to get the Territory up and going open for business after this event as soon as possible, but we are going to take a safety-first approach,” he said.

“There are hundreds of people out there at the moment working really hard to make the Top End safe again.”

He said emergency services had a list of vulnerable people who required power for medical reasons, but urged anyone who was concerned to get in touch.

A number of Darwin business owners said they have arrived at work to find their properties looted in the aftermath of tropical cyclone Marcus.

Nursery owner Estelle Cornell said she couldn’t believe it when she came to work and found the place raided.

“I’ve been not only taken out by the cyclone, but also robbed,” she said.

She said she was robbed of her charity tins and cash from the till.

“It’s a pretty hard pill to swallow, and whoever it is, I hope you’re enjoying because you’re very, very selfish,” she said.

“There’s so many people out there who need help … [the thieves] have got no morale, they’ve got no feelings.”

A vehicle allegedly drove into a car dealership in Winnellie to access the showroom at the height of the storm on Saturday, sales manager David Perri said.

Mr Perri said he was checking the building was okay when he discovered the significant damage to doors and windows, however, no cash or cars were stolen.

Mr Perri, who believed he was still in the building when the offenders were there, said he was surprised someone would go to that length during a cyclone.

“I think a lot of people would have gone and checked their own businesses today to see that they were still intact,” he said.

Darwin Police Regional Manager Warren Jackson said people could try to take advantage of the vulnerability of homes and businesses after the storm.

“Crime is always a concern in an emergency situation,” he said.

Police were calling for witnesses after a generator that was being used to power a set of traffic lights was stolen.

Officers say the device was stolen from the Bagot and McMillans Roads intersection just before 3:30am on Sunday; it was running traffic signals at the site at the time of the theft.

As the clean-up gets underway, Darwin is also bracing for the threat of another cyclone, as a tropical low could form north of the Territory this week.

The Bureau of Meteorology NT was keeping a close eye on the monsoon trough developing in the Arafura sea that could form into another cyclone near Darwin midweek.

Forecaster Sally Cutter said it was hard to know which way it would go and how strong it could be.

“It’s going to depend exactly where it forms in the trough; it could come through central parts of Top End, could pass close to Gove, or if it forms far enough east go through gulf of Carpentaria and [it could] have little impact,” she said.

“But it’s still a bit over a week out and the guide at this isn’t clear so we are just keeping a very, very close eye on it.”