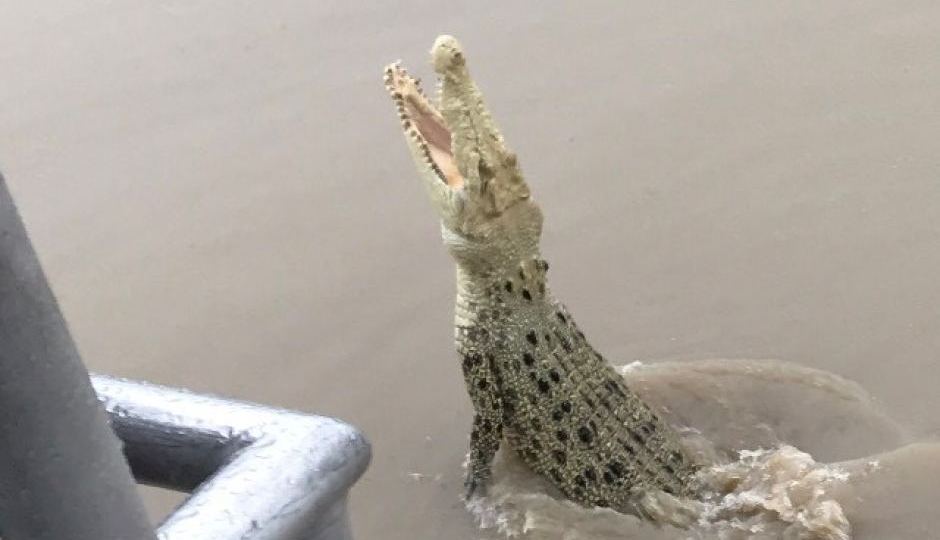 The appearance of Pearl, an albino crocodile, in the wild has been described as "amazing". Photo: Supplied/ABC

A rare white crocodile spotted in the Adelaide River outside of Darwin may be related to an infamous white-headed croc which was shot dead after it killed a fisherman.

Ecologist Shai Ager was on a tourist cruise on the river on Sunday when the three-metre croc known as Pearl was seen.

“We saw the white albino crocodile and, as far as I’m aware, it was only seen last November so a lot of people weren’t sure if it was still alive or not,” Ms Ager said.

The Adelaide River was also home to a 4.5-metre saltwater crocodile with a white head known as Michael Jackson, which was hunted down and killed after it took a fisherman who ventured into the water in 2014.

An expert said that at the time of its death the crocodile was a one-in-100-million rarity.

It is now suspected Pearl could be a relative of Michael Jackson the crocodile, which was believed to be 40 to 60 years old.

“It’s not just the head – the whole body was white,” Ms Ager said.

“There was a little bit of black speckle, but it wasn’t like the old Michael Jackson crocodile.

“A lot of people are saying it’s maybe a child or distant relative of the Michael Jackson crocodile, which is extremely special for a lot of conservationists and scientists.”

White crocodile hatchlings are not uncommon, but it is unusual for them to survive to adulthood, Ms Ager said.

“They can be a little less rare when they’re younger but most of them don’t survive to maturity, so to see a three-metre crocodile – a white crocodile like this – in the wild is just amazing, it’s just very rare,” she said.

Michael Jackson the croc was well known to locals, tour operators and researchers, and was easy to locate, but it is understood Pearl is new to the area.

“This one came up five weeks ago and just stood out and surprised all our crew,” Mr Keighley said.

“They named it Pearl and got attached to it.”

The guide said the condition that gave the crocodile its white colour is called hypomelanism, which could be genetic or caused by the temperature at which a crocodile’s egg is incubated.

“It could have some genetic misinformation or could be in the egg incubating at a temperature [and] it came out with a lack of colour,” Mr Keighley said.