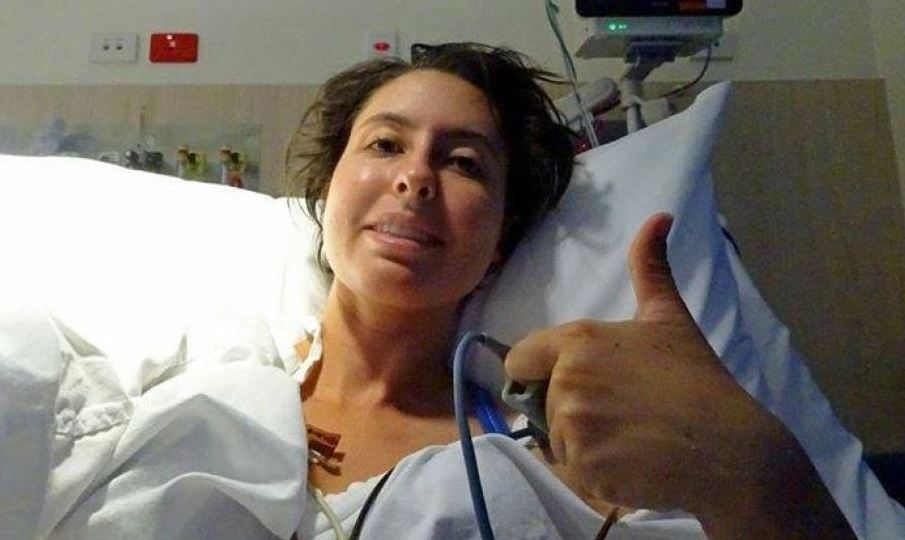 A Darwin couple has revealed an ordeal that saw them wade through crocodile-inhabited waters to be airlifted to hospital, when the woman fell unconscious after being bitten by a March fly.

Husband and wife Allan and Zerena Di-Prima, told ABC Tales from the Tinny how a typical day of fishing in Leaders Creek took a dramatic turn in late October after they became marooned by a low tide.

Once the couple made it to safety, doctors told them Ms Di-Prima had suffered a severe anaphylactic reaction.

“I had a bad bite on my toe and it was really hurting, like more than usual.

“My whole body started to come up with hives and a rash. I started freaking out a little bit, my sight started to go in and out.

“Allan was yelling at me like, ‘How many fingers have I got up’ and I just couldn’t see anything, it just faded to black and I passed out.”

Allan then tried to bring her back into consciousness by pouring cold water over her, all the while trying to return to the boat ramp.

“Then she started convulsing and her eyes rolled back in her head, she started flopping into the front seat,” Mr Di-Prima said.

“She had absolutely no motor functions at all … I just kept trying to get to the ramp because it was the only way I knew to get her to safety.

“Unfortunately with the low tide, I knew there was no way we could even make it back to the boat ramp.”

Mr Di-Prima got out of the boat to push it through waters inhabited by crocodiles, with the boat ramp still about 700 metres away.

“I was just in survival mode just trying to get back and get some help,” he said.

“Out of nowhere she came to, and started talking to me, we both hopped out of the boat and I said, ‘We’ve got to go, we’ve got to walk to the ramp’.

“The mud was well over my knees and depth and I was trying to carry her through it and trying to get her to help me get over some rocks, a few wood holes where there could’ve be a good sized croc or something like that hanging out,” Mr Di-Prima laughed.

“And because I poured all the cold water over Zerena, I ran out of water myself, so I was nearly dry-retching because of thirst.”

After wading through the muddy mangrove waters, Mr Di-Prima raised the alarm and a Careflight helicopter soon arrived to airlift the couple to Royal Darwin Hospital with Ms Di-Prima still drifting in and out of consciousness.

Ms Di-Prima said doctors were certain it was caused by a severe anaphylactic reaction to the single March fly bite on her toe, but she had never been allergic to anything prior to the incident.

“Before that [the anaphylactic reaction] I had started getting big welts coming up every time I was bitten, and they [doctors] just think it built up and my system was like, ‘Nup’,” Ms Di-Prima said.

“So it could pretty much happen to anyone.”

The couple said they were not deterred from future fishing trips, but will be more prepared for the unusual.

“If you know you have anaphylactic reaction to things, make sure you take that Epipen with you, plenty of water, all your safety gear,” Ms Di-Prima said.
“And always take a fishing buddy, because one day it could save your life.”