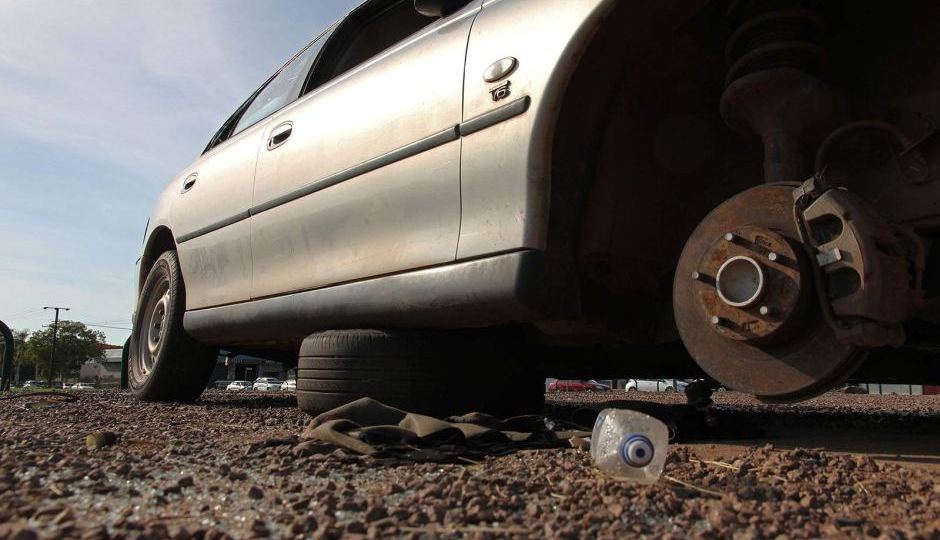 Abandoned cars are a standing feature in some streets of Darwin, many of them damaged and stripped of number plates. Photo: ABC

Anyone who drives around Darwin would be familiar with the sight of the beat-up, broken-down cars abandoned in the city’s car parks and bushland.

Recently, a car left at the entrance of the popular Mindil Beach stayed there for weeks.

It was one of more than 1000 cars dealt with by City of Darwin this year.

“There were 1003 complaints to council and we’ve impounded 146,” said Conneil Brown, the council’s regulatory operations supervisor.

Council coffers bore the brunt of these removals.

The council recouped $55,000 from owner release fees and auctions of uncollected vehicles.

More remotely the West Arnhem Regional Council said it was aware of about 700 abandoned vehicles close to township boundaries.

Newspaper classifieds regularly advertise hauls of abandoned cars in the hope that owners might come forward.

These are the vehicles that have been issued with notices – for 24 hours if they’re unregistered, otherwise up to a week if they are – before being towed.

Cars that pose a threat to safety are removed immediately.

But these notices are dependent on a complaint being made in the first place.

“To be honest, there are some vehicles that you probably see around the municipality that will be there for quite some time,” Mr Brown said.

“If it’s not reported to us, if we haven’t observed the vehicle itself, it’s not going to be actioned.”

People claiming impounded cars fork out a $357 release fee, while interstate and unplated vehicles are advertised for two consecutive weeks before eventually making their way to auctions and scrap metal processors.

This is where council recoups some of the money it’s spent on towing.

For vehicles abandoned on private property, it’s a different story.

Business owners must dip into their own pockets as they attempt to locate previous owners, seek independent legal advice if the car is worth more than $7000, and ultimately transfer the vehicle to their name before dealing with it.

“I know it’s an inconvenience for them, but legally we cannot go onto that property itself and remove any of those vehicles,” Mr Brown, who said there were only three such complaints this year, admitted.

Are tourists to blame?

Posed the question of why Darwin had so many abandoned cars, social media users came forward with their own theories.

“When I was looking at the stats yesterday, I thought that it would be a trend that it’s mostly backpackers’ vehicles, but that’s actually not the case,” Mr Brown said.

Tourism Top End, which has previously brought attention to the impact abandoned cars have on the city’s visual appeal, agreed.

The number of complaints also fluctuates with the seasons, dropping from an average of 100 per month to about 80 during the end-of-year holiday period.

“Normally in December to February it’s a low period, and whether or not that’s because a lot of people are leaving Darwin, I don’t know,” Mr Brown said.

“I could not pinpoint why exactly there are so many vehicles in the municipality.”