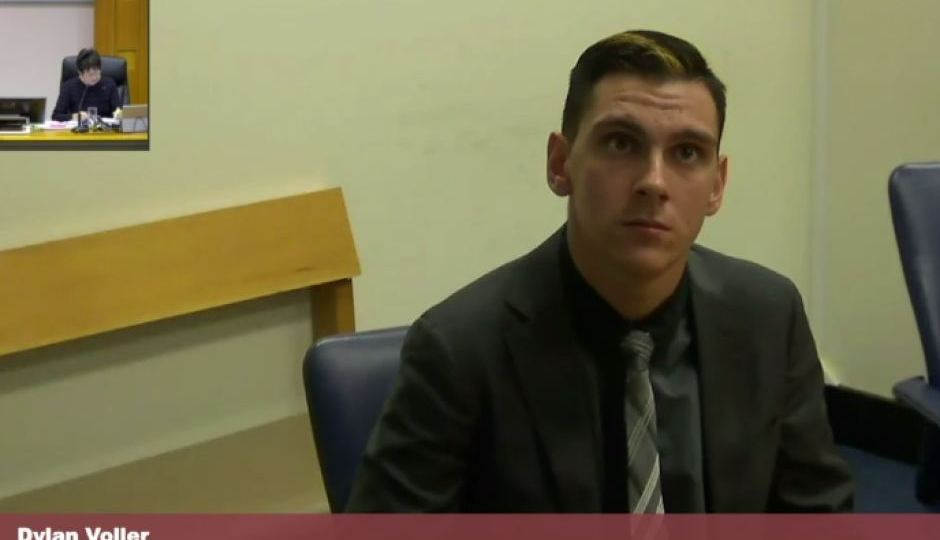 As a primary school student, Dylan Voller broke windows, defecated in a classroom, assaulted other students, spat on a teacher and tied socks around his neck, threatening self-harm, the NT Royal Commission into Youth Detention has heard.

Mr Voller was called back to give evidence from Alice Springs via video-link on Thursday, following his initial testimony in December when he made many allegations about teachers and prison officers.

The cross-examination on Thursday was intended to question him about some of those initial allegations.

A portrait was painted of a child with serious behavioural difficulties as NT Solicitor-General Sonia Brownhill outlined several incidents which led to him being suspended from school several times.

Mr Voller first started attending school in 2006 for two hours a day, contingent on his taking Ritalin to manage his attention deficit disorder.

Several years later, after Mr Voller was suspended for punching another student in the head the day after he returned from a three-day suspension for assaulting three other students in the playground, his school in Alice Springs decided it could no longer keep teaching him because of safety concerns for other students and staff.

Mr Voller said he could not recall that incident, and did not recall that an offer had been made for a management plan that would allow him to continue his education either there or at another educational facility.

“I did go there but there was an incident there as well,” Mr Voller said.

He admitted to a series of statements put to him by Ms Brownhill that he sometimes did not want to go to school, refused to take part in class, disobeyed teachers and was disruptive to other students.

But when asked if he assaulted teachers, or spat on a teacher, Mr Voller said: “I don’t remember that.”

Ms Brownhill asked him whether he threatened a youth worker while he was housed in the Aranda House youth detention centre in Alice Springs, a facility which has since closed.

She listed several incidents of him threatening staff, tearing off at-risk clothing, defecating and urinating deliberately outside of a toilet.

At-risk clothing is a gown given to children in detention when officers deem they may be a danger to themselves in order to stop them from using their own clothes to self-harm.

“You threatened to rape the children of the staff present and their grandchildren, and you specifically threatened to burn down Mr Tasker’s house with his family inside, do you agree with that?” she asked.

His lawyer said the questioning about Voller’s past behaviour, which he had already conceded was difficult, was unfair.

“To put these allegations one after the other, when he was 14 years of age, it is totally unnecessary, it is designed to humiliate and embarrass the witness and it’s not going to assist the commission in determining what happened during any of the events he complained about,” Mr O’Brien interjected.

He said Ms Brownhill had not yet asked any questions of Mr Voller about the instances of violence against him in detention.

But she said Mr Voller’s credibility as a witness had been questioned and that his characterisation of his own behaviour in detention was a “gross understatement”.

Barrie Clee, who was the former senior youth worker at the Alice Springs youth detention centre, denied he put Mr Voller into isolation where he was stripped naked in retaliation for Mr Voller making a police complaint against him.

Footage from the 2010 incident shows a young Mr Voller pinned down by guards and stripped naked, sobbing as he dresses himself in an “at-risk” gown.

The commission heard an incident report showed that just minutes earlier Mr Voller had telephoned police to make a complaint against Mr Clee.

Mr Clee said he was not aware of the complaint until the following next day, which was challenged by Mr Voller’s lawyer Peter O’Brien.

“It is simply implausible, Mr Clee, that you weren’t notified or didn’t come to know of a complaint made against you that evening, probably only minutes later,” he said.

“I didn’t know, what more can I say?” Mr Clee replied.

He said he could not recall if he informed his manager about the complaint.

Mr O’Brien also suggested Mr Clee had provided a false statement about the incident because he was trying to cover up the incident.

“I deny that, I wasn’t trying to cover anything up,” he said.

Michael Hughes, who was the officer who placed a spit-hood on Mr Voller and restrained him in a chair for up to two hours at a time, admitted there were instances when the hood was not fitted properly.

“You can’t recall him saying ‘I can’t breathe, I’m choking’, something to that effect?” Mr O’Brien asked him.

He also said he did not recall Mr Voller wetting himself or asking and being denied use of the toilet.