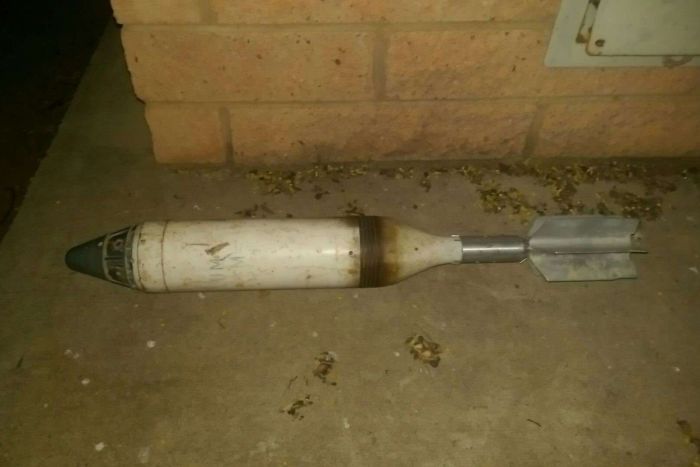 An Alice Springs fossicker who found an old military mortar and took it home, had a police perimeter set up in his home, while it was appraised by the army.

The man was fossicking north of Alice Springs when he found the football-shaped mortar.

Police said the man’s wife was alarmed when he brought it home and dumped it on the kitchen bench.

Watch Commander Darren Keenan said army experts were called to appraise the bomb while a police perimeter was established.

Fortunately, it was found to be spent, but police said they had erred on the side of caution.

“Should it not have been spent … it could be extremely unpredictable in terms of what could trigger it,” Watch Commander Keenan said.

“Whether it be a rusted firing pin or anything to that effect. Moving old things like that can actually see a detonation of sorts.”

Police said they did not yet know how old the mortar was, whether it was historically significant, or how it came to be lying in the bush.

“But a lesson to be learnt in that if you find something in the bush that you may have any suspicions or concerns about, don’t touch it and notify your local police rather than bring it home and putting on the kitchen table to a very unimpressed wife,” Watch Commander Keenan said.

“It was a surprise find, so anything is possible. I couldn’t say if there’s more out there.”

Police said the mortar, weighing between 2 and 3 kilograms, would be stored in a safe at the Alice Springs police station, and retrieved by the army “in due course”.