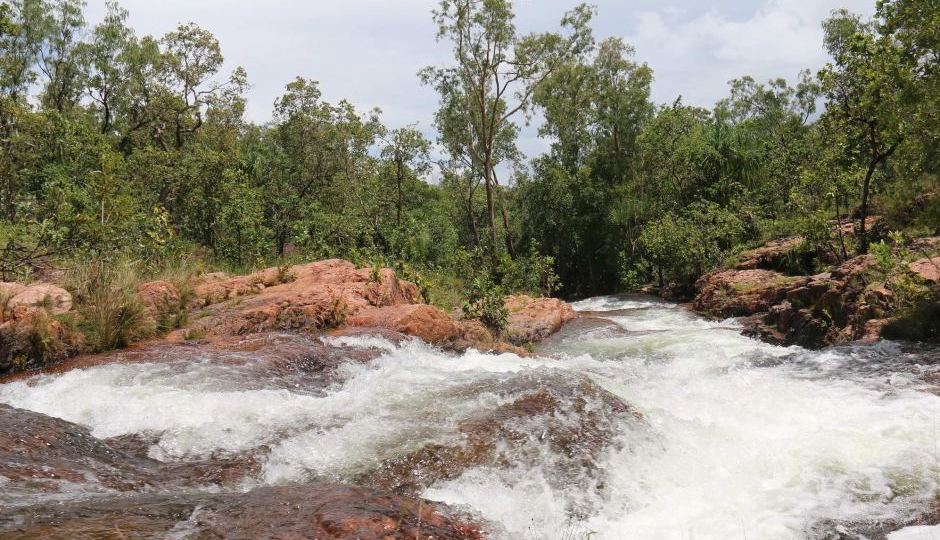 Buley Rockhole is a series of pools near Florence Falls in Litchfield National Park. Photo: ABC

The spectacular waterfalls at Litchfield National Park, south of Darwin, are pumping after huge amounts of wet season rain.

From parched, bushy country to thundering waterfalls and greenery, the park’s environment goes from one extreme to the other during different seasons, drawing in locals and visitors alike.

“We had our first big downpour at the end of December; this was enough for us to close all of the swimming sites on the western side of the park,” ranger Wendy Hayward said.

“Since then, Florence Falls and Buley Rockhole have been on and off, depending on the rainfall in the last 24 hours or so.”

Florence Falls in Litchfield National Park is usually packed with tourists and locals looking for a cool escape from the humidity, but this wet season it has turned into a torrent of water.

Currently only halfway through the wet season, the Top End has already received more rain than the whole of last year’s season, and it is showing.

“You never know what’s going to happen with storms and that, it’s just beautiful country to work in.”

The rangers said last year was their biggest in terms of visitor numbers in the park.

Tourism numbers usually drop at this time of year, although for some visitors, the park in the wet provides a quiet escape surrounded by unique and luscious greenery.

Most of the pools are closed for swimming because of dangerous currents and the possibility of saltwater crocodiles in the lower part of the park.

“Coming up at this time of year we were looking forward to the thunderstorms and heavy rain, so it’s been lovely really,” one tourist said.

They resemble nature’s own graveyard, but Litchfield’s famous magnetic termite mounds also transform after the wet.

Surrounded by long spear grass, the thousands of termites that call the mounds home go underground during the wet season.

“With that water table that rises, they can’t get out, so all of their little access tunnels under the ground, they’re inaccessible, so they just live within the higher levels of the mound and wait the wet out,” Mr Woolnough said.