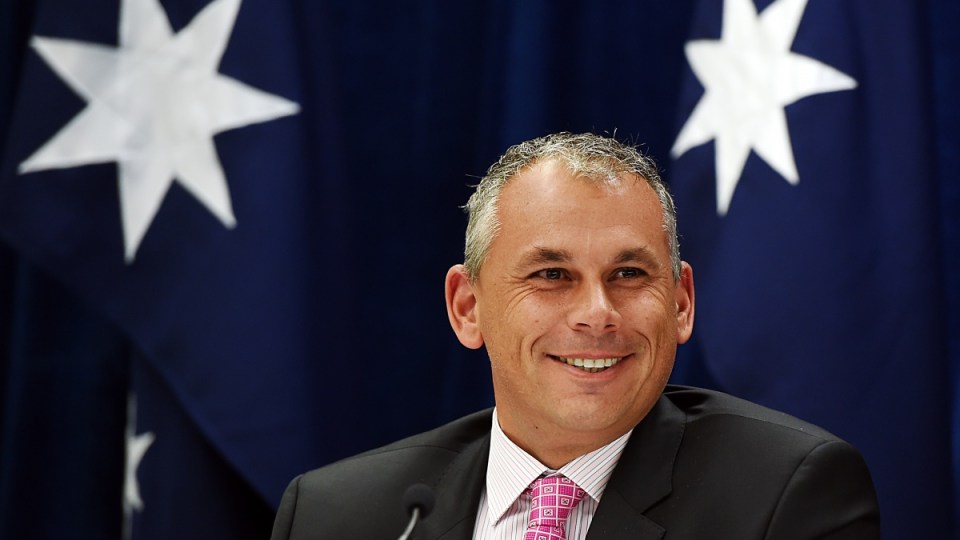 Northern Territory Chief Minister Adam Giles says he was frustrated when he suggested putting bad criminals in a “concrete hole” in 2010.

The NT is under national scrutiny following the airing of footage of young prisoners being abused by officers in Darwin’s youth detention centre.

Hansard records Mr Giles as saying to parliament in 2010 that he would “love to be the corrections minister”.

“It is not the portfolio I really aspire to but, if I was the prisons minister, I would build a big concrete hole and put all the bad criminals in there: ‘Right, you are in the hole, you are not coming out. Start learning about it’,” he said at the time.

“I understand there are rules which guide the prisons in Australia and the United Nations, and how we use basic human rights in the treatment of prisoners… what I do not understand is how we are soft, flaccid, and incapable of punishing prisoners in our corrections system…

“I might break every United Nations’ convention on the rights of the prisoner but, ‘get in the hole'”.

The comments have been circulating on Twitter on Wednesday and when questioned Mr Giles said he was venting his frustration.

“I get aggrieved with youth crime on our streets… I’ve had a gutful just like everybody else and I’m the first to say it,” he told Mix 104.9 FM in Darwin.

“I might break every United Nations’ convention on the rights of the prisoner but, ‘get in the hole'”.
Adam Giles in 2010

“Nobody wants to see kids in jail but nobody wants to see their own kids get assaulted by other kids, their houses getting broken into, or their cars stolen, and I will stand up for Territorians who are becoming the victims of crime.

“I vented my frustration by saying ‘put prisoners in the hole’ in 2010, I did that then. I’m now chief minister, I take responsibility for the whole lot of government and past governments who created injustices.”

At a press conference after his radio interview, Mr Giles said “five incidents” seen in the ABC’s Four Corners program on Monday night occurred under the watch of the previous Labor government.

“I have sought to change lots of things since being in government and I would like to think the prison system now is a lot better than four years ago.”

Mr Giles said it was the NT who instigated the inquiry into youth detention.

“It was the Northern Territory government’s suggestion to have the royal commission … it is good to see the Prime Minister come on board and support that from a joint initiative,” he said.

Asked if restraint chairs – like the device Dylan Voller is seen strapped into – had been introduced before appropriate legislation had been enacted, Mr Giles said he would “like to take advice on that”.

“The restraint chair, as I understand it, is part of the adult corrections system. I will have to take advice on that,” he said.

Questioned on whether Mr Voller should be released from NT Corrections, Mr Giles said: “That’s a matter for the courts. I don’t get involved in the court process.”

Mr Giles says the use of spit hoods and restraint chairs in juvenile detention in the territory has been suspended until a royal commission into the treatment of inmates is held.

But he also said the implements, which made for confronting footage on a Four Corners, were brought in because some youths had sought to self-harm or to harm officers and other inmates.

“There are times in jails when some of the youth detainees become highly tense and they need to be put in a position of calmness,” he said.

There were also “a number of youth detainees with Hepatitis C that spit on officers”. Speaking on Mix 104.9 FM, Mr Giles also hit back at calls for his government to be sacked, saying he was “the only one with the balls and the guts” to take responsibility for the failings of the previous Labor government.

“SACK THE LOT OF THEM” screamed the front page headline of the the NT News  on Wednesday.

Mr Giles said calls for his government’s resignation were “rubbish”.

The NT News also reported Wednesday that details of the Mr Voller being restrained in the  mechanical chair were included in a Children’s Commissioner report, which makes numerous references to guard conversations and video footage.

It said the NT government had access to the vision used by Four Corners and also to a separate and private report by former Children’s Commissioner Howard Bath on years of alleged abuse suffered by Mr Voller.

‘Get in the hole’ comments due to frustration: Giles