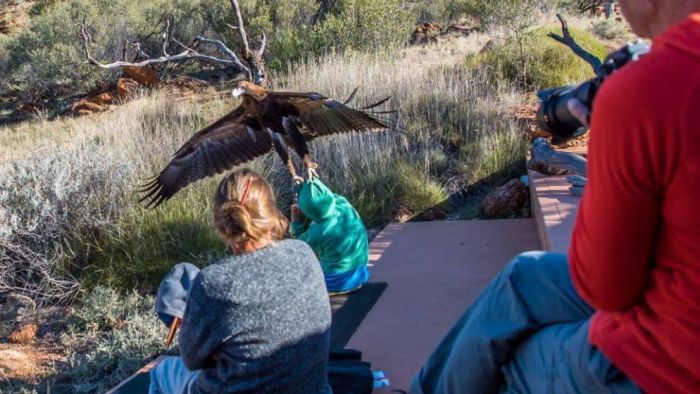 A Horsham woman’s photograph of a wedge-tailed eagle attacking a boy at an Alice Spring wildlife park has made headlines around the world.

The photograph shows the eagle making contact with a boy’s head at the ‘Eagle Encounter’ show at Alice Springs Desert Park.

Christine O’Connell, who is travelling around Australia with her husband, said the boy screamed when the eagle attacked him, and his face was left bleeding after the incident.

“I don’t know about trying to pick him but he definitely grabbed him by the head and tried to take off,” she said.

“I think the eagle thought the boy was an animal because the little boy was pulling his zipper up and down really quick, and he had a hoodie on so all the bird could see was the green of the hood and hear the noise.

“Everyone was a bit shell-shocked – it happened so quick. Nobody said anything. All of a sudden one of the guides ran over and stood the bird down and stood in front of him.”

Mrs O’Connell said she had been to see the eagle show last year.

“Normally the bird flies down and lands in front of the crowd and you get a photo opportunity, so I thought seeing as though I already had that photo, I would try and get him taking off,” she said.

“I had the camera on multiple shots, luckily, and just as he took off, he actually didn’t go where he was supposed to. He just flew straight down to the young boy sitting 10 to 15 feet away from him.”

Mrs O’Connell said she was surprised her photo had been picked up by international media, including the BBC and USA outlets.

“It was one little photo that I actually wasn’t going to post on Instagram until my husband talked me into to it. I didn’t think it was a clear enough photo, I thought it was a little bit blurry,” she said.

The show continues to feature at the park, following the incident on July 6.

A Northern Territory Parks and Wildlife spokesperson said a thorough investigation regarding the circumstances behind the incident was underway.

“The eagle will be removed from the show while this investigation is ongoing,” he said.