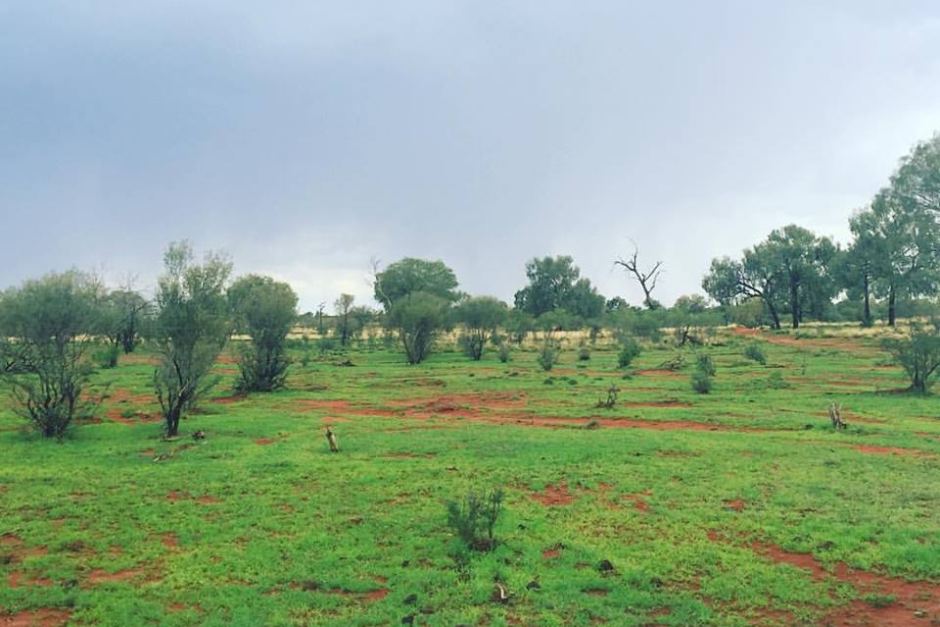 A month of consistent rainfall has transformed the usually arid environment of the Red Centre into a carpet of green.

Local pastoralists were happy with the fortuitous start to the season, with one saying it was the best rainfall they had seen since 2010.

Wally Klein, who runs Orange Creek station, a cattle property about 100 kilometres south of Alice Springs, said he was delighted with the higher-than-average rainfall in the past month.

• The perfect travel bucket list for science lovers
• Backpacking Europe: we give you a basic guide
• How the Costco mirage is fooling Australians

“We had the best Christmas present ever, it actually rained for us and the river ran,” Mr Klein said.

There has been further rain and unusually cool weather since.

The weather has had a stunning impact on the Central Australian landscape.

“It’s absolutely fantastic to see how the country responds, the grass is just leaping out of the ground and we’ve still got a couple more rainy months to go yet,” Mr Klein said.

Cattle prices soared with greater demand for live exports from our Asian counterparts and Mr Klein said he could not believe all his “ducks [were] lining up in a row”.

“It’s the first time that I can remember that we’ve got low interest, low fuel prices, really good cattle prices and now a good season to go with it,” he said.

“It’s very rare that you get everything to happen for you at once.”

The fortuitous start to the season gave Mr Klein and other pastoralists in the region much needed hope and he expected his stock to double in value over the next couple of months.

Mr Klein also hoped to open his property up for agistment opportunities.

“It puts a bit of heart back into the job and keeps us going,” he said.

The wet conditions will also help Mr Klein with other income streams, including his lucerne farm.

The humidity and moisture in the ground will allow him to cut hay every three weeks.

He expects to have enough hay to last him the whole year.

Snakes, insects come out to play in wet conditions

But it was not just the pastoralists who were happy with the unusually wet conditions.

Scott Pullyblank, curator of Life Science at the Alice Springs Desert Park, said local residents would notice a big increase in the number of insects.

“There will be a lot of Yipirinya caterpillar around and the Yipirinya moth will follow later in the year,” he said.

“Birds and snakes will be a lot more active; when we get rain like this there will be more food and it’ll extend their breeding season,” he said.

“We’ll see more creatures such as the Plains mice, long-haired rats and even the central Australian rock rat.”