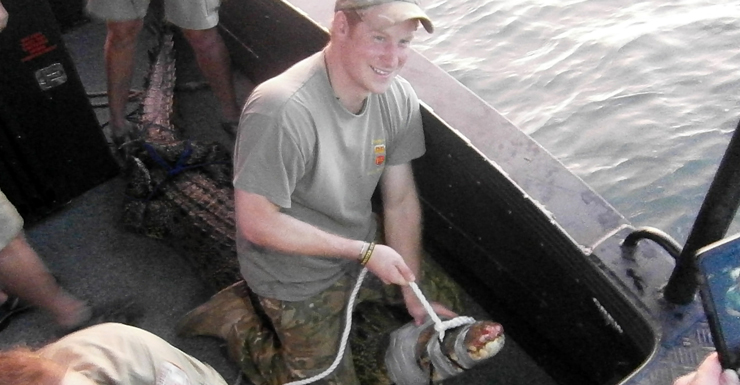 If catching a Northern Territory crocodile safely isn’t a difficult enough task for any wildlife ranger, imagine doing it under the watchful eye of a royal.

Prince Harry was recently in Australia for a secondment with the Defence Force, while also greeting adoring fans and politely declining marriage proposals.

But a trip to Darwin Harbour also involved him getting up close and personal with one of the territory’s most infamous residents.

Photographs have been released showing the prince sitting on top of a 3.1 metre saltwater crocodile he helped remove from a trap.

He showed keen interest in the work of the crocodile management team and managed to speak to all the hosting members, senior ranger Tommy Nichols said.

“He seemed to have a great time and was relaxed and obviously has a great sense of humour.”

But it was wildlife ranger Erin Britton who was under the most pressure.

“I was a little nervous at first when I was getting the snout rope on the croc, because Harry was observing so closely,” she said.

Oh come on Prince Harry, this is a bit of a croc