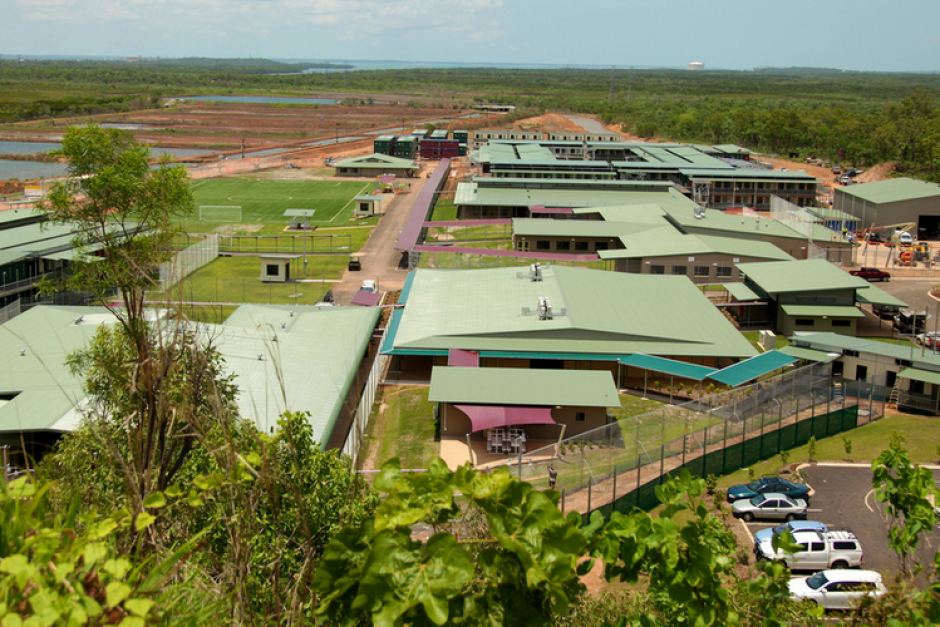 Police and paramedics have been called to a Darwin immigration detention centre after what an asylum seeker says has been a major disturbance and numerous incidents of self-harm.

The asylum seeker, who spoke anonymously, said there had been mayhem at Wickham Point Detention Centre, with about 20 detainees committing self-harm in fear of being transferred to Nauru tonight.

The ABC obtained video from inside the detention centre showing some of Wednesday’s events.

The footage taken on a mobile phone features the sound of a woman screaming and saying “no, no, no”.

It shows what appears to be a group of asylum seekers gathered on a stairwell while the woman lies wailing on the ground.

The Darwin Asylum Seeker Support and Advocacy Network (DASSAN) said one woman who witnessed the self-harm earlier was being treated at Royal Darwin Hospital.

A police spokesman said officers responded to calls of a disturbance at the detention centre just before 4:00pm (ACST) after reports of detainees damaging property and causing unrest.

Craig Garraway from St John Ambulance said paramedics were called to the detention centre at 6:00pm on Tuesday and again on Wednesday afternoon.

Ben Pynt from DASSAN said there had been a steady and rapid decline in mental health throughout the detention population at Wickham Point.

“Over the past week particularly we have seen a spike in self-harm and attempted suicides and it is really troubling the lengths that people are going to either to prevent themselves being sent offshore to Manus and Nauru or simply in protest at their detention conditions,” Mr Pynt said.

“People are absolutely desperate. They feel that they are going to be in detention forever.”

In a statement, the Refugee Action Coalition’s Ian Rintoul said about 70 asylum seekers were blockading a compound at Wickham Point to try and prevent people from being returned to Nauru.

He said the standoff began about 2:00pm after Serco security guards tried to move detainees to a high-security compound where they were to be housed prior to being sent to Nauru.

“There are also reports that asylum seekers intervened to prevent the removal following married couples and families being separated by Serco guards, and that there is one pregnant woman among those scheduled for removal,” Mr Rintoul said

The Department of Immigration and Border Protection later said that police were attending the centre “in accordance with normal operating procedures”.

“Reports of a riot at Wickham Pt IDC are incorrect,” a tweet from the department said.

“A disturbance occurred involving detainees that resulted in minor property damage,” it said.