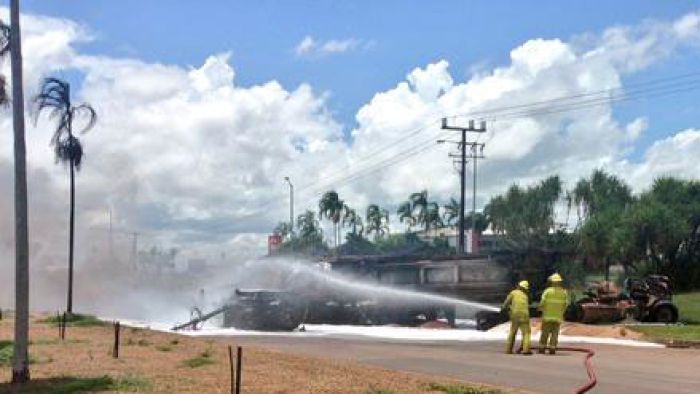 Two road trains have collided on Berrimah Road in East Arm, near Darwin.

The driver of one of two road trains involved in a horror crash near Darwin is in a critical condition with burns to seventy per cent of his body after his vehicle was destroyed by fire in minutes.

The two road trains crashed on Berrimah Road at East Arm, near Darwin, causing one of the vehicles to be engulfed in flames, police said. The driver of the second vehicle escaped major injuries but sustained burns to his hands when he pulled the other driver from his burning vehicle.

One lane of Berrimah Road was closed, causing significant delays for motorists.

NT Fire and Rescue Service watch commander Scott Perry said the crash took place about 11:00am a little more than a kilometre from Darwin’s main fire station, so emergency crews arrived swiftly at the scene.

“When we first arrived one vehicle [was] fully involved and a gentlemen was under the trees being taken care of by two rescue members,” Commander Perry said.

The driver of one truck was taken to Royal Darwin Hospital with serious burns to large parts of his body.

“He’s sustained some pretty severe injuries, he’s been transported to Royal Darwin Hospital and is undergoing treatment at this stage,” Commander Perry said.

Witnesses told the ABC the fire was extremely intense.

One man, Denis, said he had driven past the site just minutes before the accident.

“It must have happened within minutes really,” he said.

“The one who’s in the burnt truck is in a very bad way, he’s got some pretty bad burns.”

After the fire was extinguished, investigators immediately began their search for the cause of the accident.