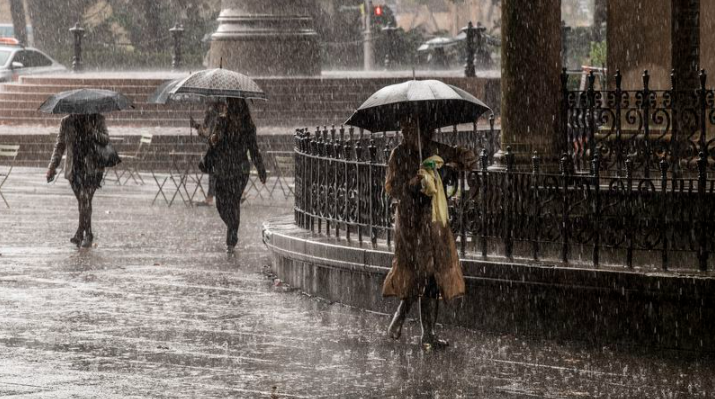 A driving rain pelts down in the centre of Sydney with further heavy downpours expected. Photo: Nine News

The month may be only halfway through but it’s already Sydney’s wettest July on record, with more than 345mm of rain recorded and further falls forecast.

The month’s previous record at Sydney’s Observatory Hill was 336.1mm in 1950, according to the Bureau of Meteorology.

Sydney exceeded that mark about 7am on Thursday after just 14 days, helped along by significant rainfall to start the month, including 93.2mm on July 3.

Sydney’s wettest July comes in the midst of what could be its wettest year, threatening a record also set in 1950 when 2194mm was recorded.

With more than five months to go in 2022, Sydney has already received 1893mm, and the wet weather is expected to continue.

Average rainfall for the remaining months of 2022 would take it over the line, and the bureau is projecting a wetter-than-usual end to the year for most of the country, including Sydney.

Sydney has an 80 per cent chance of surpassing its median rainfall from August to October, according to the bureau’s climate outlook released on Thursday.

The latest La Nina cycle has ended but there’s a 50 per cent chance it could return in spring, and a negative Indian Ocean dipole is becoming increasingly likely, which typically results in above-average rainfall, the bureau says.

The July record comes as NSW continues cleaning up from its latest flood disaster.

Flood Recovery Minister Steph Cooke on Friday encouraged people affected by the most recent flooding to attend recovery centres in Sydney and the Central Coast and Hunter regions, which operate as a multi-agency hub to help people access various support available.

“Whether you need to replace damaged documents, receive assistance with the physical clean-up or access emergency accommodation or mental health services, our centres and assistance points can help,” Ms Cooke said.