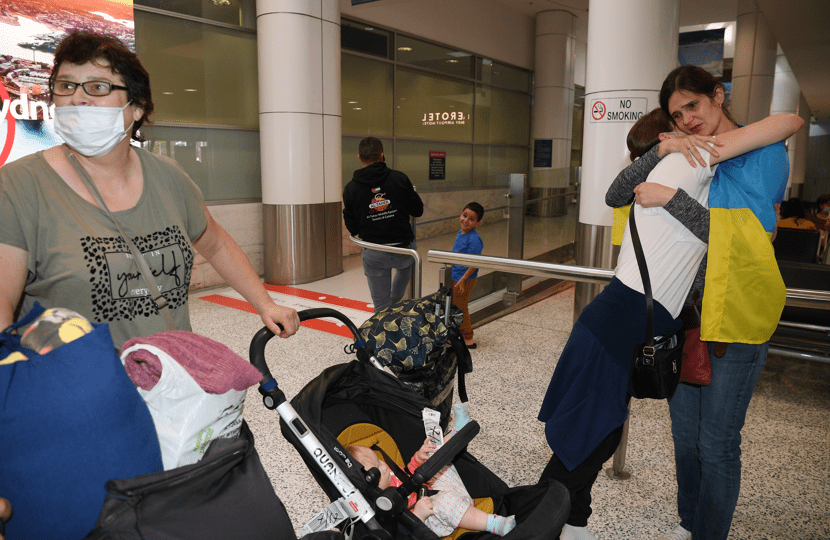 A Ukrainian family with a nine-month-old baby has found safe haven in Australia after a dangerous three-week journey that saw them barred from boarding a flight to Sydney.

Iryna Zaiets fled Ukraine with her mother, Olena Kuzmych, and nine-month-old baby Oksana when the Russian invasion began on February 24.

Ms Zaiets’ sister, Olha Lyeskakova, cried as she met them at Sydney Airport on Saturday, embracing her sister and mother, and seeing her baby niece Oksana for the first time.

“I am very happy that she is here and she won’t remember the war.”

The family had escaped to Poland and secured visas and flights to Sydney, but when they went to board a flight at the start of March, they were not allowed to board because Oksana had no travel documents.

Ms Lyeskakova battled authorities in three countries for a fortnight to solve the problem, as her sister and mother gradually gave up hope that they would be able to make it to Australia.

“It’s a big relief. I was very stressed, it was such a long journey to get them here,” she said.

Australia, land of sun and safety

Ms Lyeskakova said her sister, visiting Australia for the first time, is so far in awe.

“She is so impressed, even by the air and the sky – she is very excited to be here.”

The family has not yet had time to rest, and is spending the day moving furniture in Ms Lyeskakova’s house, to make room for the new arrivals.

It’s expected they will stay for nine months or so, depending on immigration rules.

There were half a dozen other Ukrainians fleeing the conflict on Saturday’s Emirates flight to Sydney, and Ms Lyeskakova believes there are hundreds more people granted Australian visas who are facing similar problems with travel documents.

The Department of Home Affairs said it was prioritising visa applications for Ukrainians, and all Ukrainian nationals already in Australia whose visas expired by June 30 would receive an automatic six-month extension.

Meanwhile, a small number of protesters gathered outside the Russian embassy in Canberra on Saturday morning, holding Ukrainian flags and sunflowers.