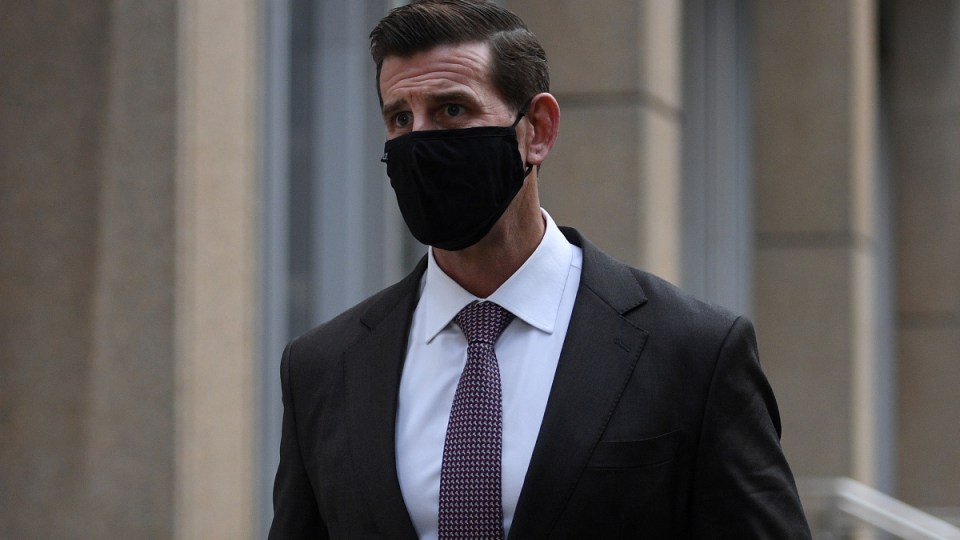 “This is what the story is,” Ben Roberts-Smith allegedly told his squadmates after being accused of catapulting an unarmed Afghan prisoner off a cliff.

A former SAS sergeant, codenamed Person Four, told the Federal Court on Monday about a controversial mission during which local man Ali Jan was allegedly handcuffed and kicked off a “steep slope” in the village of Darwan, Uruzgan province in September 2012.

The witness said the man, accompanied by a donkey adorned with a traditional red rug carrying baskets full of wood for cooking, was located in a compound they were clearing.

He was searched, handcuffed, and positioned up against a wall where he was tactically questioned by Mr Roberts-Smith through an interpreter, he said.

At some point the troop’s “extraction” was radioed-in, prompting their removal to a designated location, when Person Four rounded the corner of a rocky slope and spotted another soldier dubbed Person 11.

Person 11 was holding the same prisoner by his right shoulder and with his “back towards a large drop-off,” he said.

Person Four was “trying to understand what was happening” as he noticed Mr Roberts-Smith positioned a few metres away.

“He turned around, walked forward (and) kicked the individual in the chest.

“The individual was catapulted backwards and fell down the slope.”

Person Four said he could see the prisoner’s face strike a large rock and sustain a “serious injury”.

“Your Honour it knocked out a number of his teeth including his front teeth.”

Mr Roberts-Smith vehemently disputes the allegations and has previously testified the man was a Taliban spotter shot in a cornfield.

The 43-year-old war veteran is suing The Age, The Sydney Morning Herald and The Canberra Times for defamation over reports that he committed war crimes and murders in Afghanistan between 2006 and 2012.

Person Four said he then followed the two soldiers down a “track system” that led to a creek bed, while he was “in some shock”.

“It was something I had never encountered before … the visual effect of seeing that individual going over the side.”

As the troop approached the man he “attempted to sit up and fell back down again,” and Person Four said he and another soldier were ordered to drag him over to a large tree.

After walking some distance away he turned around to see the prisoner standing before “shots rang out”.

An Icom radio was then allegedly positioned on the body before photographs were taken and delivered back to headquarters.

A debriefing between Mr Roberts-Smith and a number of commanders followed, before he rejoined his three troop comrades, Person Four said.

“He came back into our room and said: ‘This is what the story is. The story is that we engaged a spotter’,” whilst moving to the extraction spot, he said.

Later Person Four spotted a whiteboard with a drawing depicting a “winged penis kicking an individual” from a cliff, he said, adding Person 35 had a reputation for winged penis cartoons.

Mr Roberts-Smith — one of a handful of Australian recipients of the Victoria Cross since 1970 — has suggested the execution claims and others stem from jealous associates spiteful of his medallic achievements.