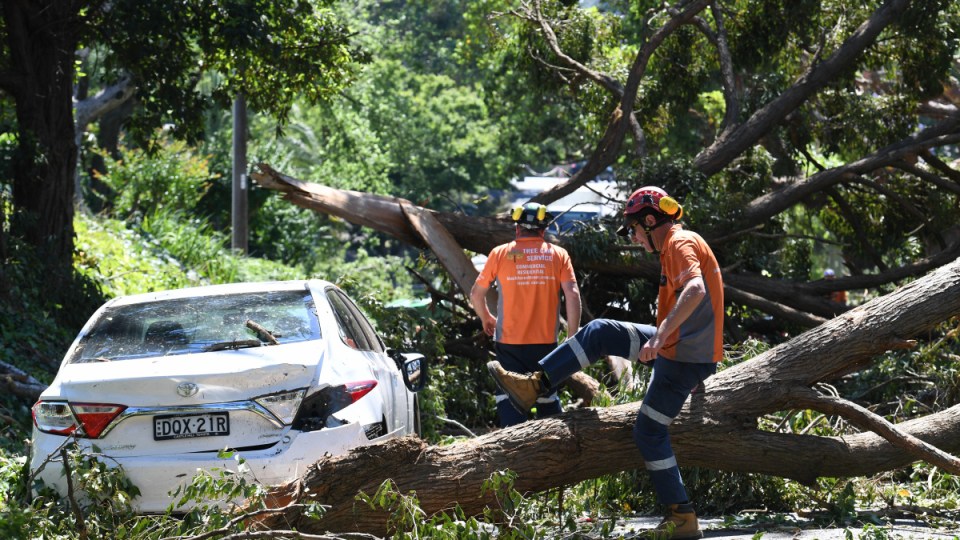 Tree-loppers get to work in Gordon, which was hit hard by Tuesday's storm. Photo: AAP

About 29,000 residents of Sydney and the Blue Mountains were still without power on Wednesday afternoon – 24 hours after severe storms uprooted trees and blacking out thousands of homes and business.

Ausgrid spokesman Jonathon Hall said the damage from Tuesday’s thunderstorm had brought the largest power outage the network had seen in recent years.

At one point, more than 50,000 customers were without power.

“Some of the damage we have seen to the electricity network is severe and that’s even to our high voltage network as well,” he said.

Ausgrid spent Tuesday night clearing debris and fallen trees that toppled onto cars and homes in Sydney’s north, where the storm damage was most severe.

More than 1500 hazards on the network that had to be made safe before power could be restored, it said.

“Most people would have been without power overnight,” Mr Hall said.

Power is still out to 900 customers in parts of Chatswood. our crews are responding to more than 1,800 hazards and working to make them safe. Customers should prepare for another possible night without power tonight as we rebuild damaged parts of the network. #sydneystorms pic.twitter.com/S1rZokZoVp

On Wednesday afternoon, the power provider warned that suburbs in Sydney’s north faced the prospect of extended outages – and might not have electricity restored until Thursday.

“Power is still out to about 29,000 homes and businesses, mostly in Sydney’s north,” an Ausgrid spokesman said.

“Customers in the worst-affected areas are being advised to prepare now for another night without power overnight into Thursday.”

Ausgrid said extra crews were coming from Newcastle and the Central Coast to help with repairs, with storm-related damage to be prioritised.

The ABC is reporting that students from some schools in Sydney’s north were told to stay home on Wednesday, due to damaged buildings and the power cuts.

A large concentration of requests for assistance from the public along the North Shore from Pymble to Willoughby extending into Frenchs Forest. We thank you for your patience as our NSW SES crews respond to an increasing number of jobs across Sydney. #storm #sydneystorms pic.twitter.com/ZvRCrIB7J0

NSW was a “state of extremes” on Tuesday as a short, intense storm – reportedly lasting just a few minutes – downed trees and powerlines in Sydney. Elsewhere, snow fell in Thredbo, while other parts of the state sweltered amid continued high fire danger.

Winds reached up to 104km/h at Fort Denison, closely followed by 96km/h in Holsworthy and 95km/h in Sydney Harbour, the weather bureau posted on Twitter on Tuesday afternoon.

Pea-sized hail even fell in the Sutherland region, it said.

Other parts of the state also reached temperatures in the mid to high 30s, including 35.4 degrees recorded in the heart of the city at the bureau’s weather station on Observatory Hill.

The severe weather also caused chaos for the afternoon commute.

Trains were stopped in sections of the North Shore and Central Coast and Newcastle lines, Transport for NSW said on Tuesday afternoon.

Those were running again by Tuesday night.

However, roads in Sydney’s north remained disrupted because of fallen trees and blacked-out traffic lights.

The NSW State Emergency Services said on Wednesday it was still working through a large backlog of calls for help.

“Our crews will be coming out and removing a lot of those trees from access, such as driveways and roads,” he said.

Around 100 new fires have been detected in the past 24 hours due to lightning. There are several very remote fires near Warragamba Dam which are likely to burn for some time, despite a big effort by ground crews, Remote Area Firefighters and aircraft. #nswrfs #nswfires pic.twitter.com/vlnB65mEUd

Power still to be restored to thousands hit by Sydney storm