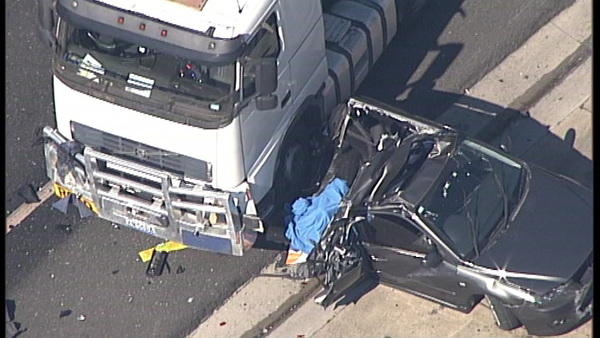 The scene of the accident where a child died on Wednesday. Photo: ABC

A child has died and six people have been taken to hospital after three cars and a truck were involved in a crash on Sydney’s M5 on Wednesday morning.

NSW Police said emergency services were called to the M5 just east of the Belmore Road exit at Riverwood, after reports of a crash about 8.20am.

Police said one child died at the scene and another child, travelling in the same vehicle, was transported to St George Hospital in a serious condition with suspected head injuries.

Another 12-year-old girl was treated at the scene before being taken to Sydney Children’s Hospital in a serious but stable condition.

NSW Ambulance said the driver of the car in which the child died was trapped for a long time and had to be cut free.

She was also taken to St George Hospital in a serious condition.

More than a dozen firefighters and paramedics were on the scene.

The three other drivers were taken to hospital to be treated for non life-threatening injuries.

All lanes heading into the city were closed on Wednesday morning, but two had reopened by 1.20pm.

Drivers were advised to allow extra travel time and to divert through Belmore Road, Canterbury Road or Georges Road to re-join the M5.

Police have established a crime scene.