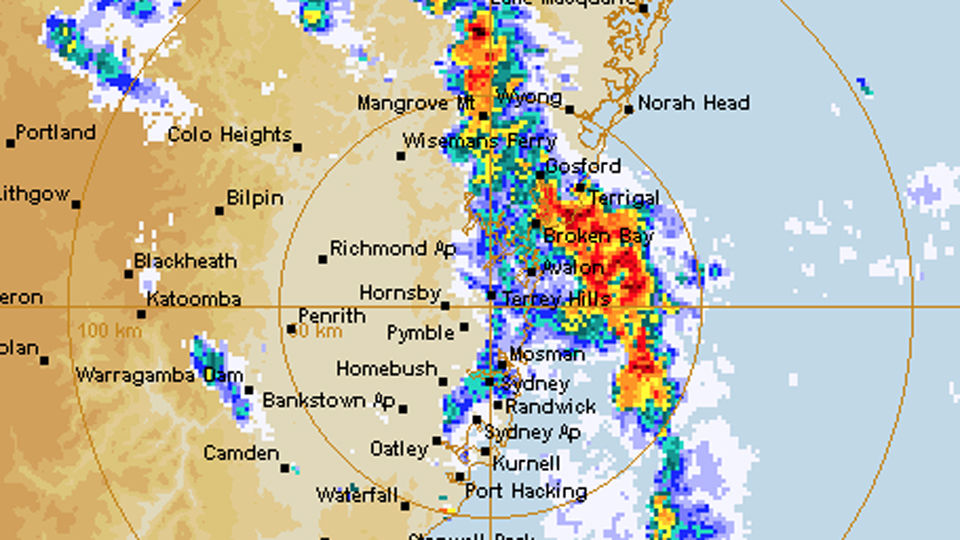 Parts of Sydney have been pummelled by a severe thunderstorm that has uprooted trees and cut to power more than 50,000 homes and businesses across the city in just a few minutes.

The Bureau of Meteorology issued a severe thunderstorm warning about lunchtime on Tuesday (local time), warning large hailstones and damaging winds were likely in the afternoon, as a cold front swept the wider Sydney area.

BOM meteorologist Gabrielle Woodhouse said there had been wind gusts in Sydney of up to 100km/h.

“We expect a similar situation through parts of the Hunter, mid north coast and parts of the north west slopes, plains and northern tablelands,” she told the ABC.

“We recommend you move your car away from trees.

The short, sharp storm – which hit about 1.30pm and reportedly lasted just five minutes – brought power outages that halted the T1 North Shore and Central Coast and Newcastle lines between Berowra and Gordon to a standstill.

Traffic lights were also out at Roseville, while other roads – including the Pacific Highway at Pymble and Old South Head Road at Bondi – were closed due to fallen trees.

STORM UPDATE:
Ausgrid is working to restore power to about 51,500 homes & business after severe storms swept across Sydney & the Central Coast. These photos are from Hornsby Heights. Our crews are responding to more than 780 hazards. https://t.co/MxbaFPxBlK #sydneystorm pic.twitter.com/n09i9i8pKg

Tuesday’s storm hit just a day after an earlier storm brought heavy rain and hail to the region north and east of Sydney, including Newcastle.

Earlier on Tuesday, Sydney residents had woken to another day of below-par air quality.

Air quality was officially “poor” in south-west Sydney at 11.30am on Tuesday and “very poor” in east and north-west, as well as in Coffs Harbour.

Firefighters had endured a nervous wait on Monday night to see if lightning strikes would spark more bushfires and were assessing the fallout.

“Not exactly what we wanted to see,” the NSW Rural Fire Service tweeted after the state was hit by storms on Monday night.

One such lightning-sparked fire started in remote terrain east of the Macdonald River in the Hawkesbury. It was burning out of control in the Dharug National Park.

Building impact assessment teams from the RFS continue to investigate damage in fire grounds across the state.

So far, 663 homes have been destroyed in bushfires this season, while six people have died.