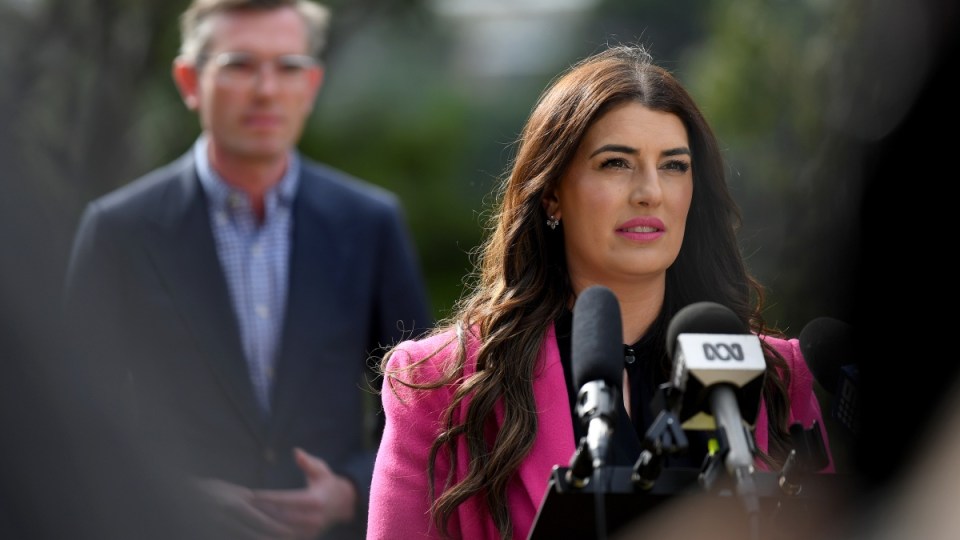 Dominic Perrottet made the difficult decision to sack NSW fair trading minister Eleni Petinos after receiving information that led him to believe her office was not a safe environment.

Ms Petinos was removed from her roles as fair trading and small business minister on Sunday night, days after allegations of bullying in her office.

“Last night was a very difficult conversation for me to have,” Mr Perrottet told reporters on Monday.

After making inquiries into Ms Petinos’ office on Sunday, Mr Perrottet said he had to act based on the information he was given.

“I note that she denies the allegation … and I accept that but based on the inquiries that I made over the course of yesterday I’ve formed the view that her position was not tenable.”

“That’s my judgment call,” the premier told reporters on Monday.

“I need to ensure that every office workplace is safe, whether it’s in the NSW government or anywhere across our state.”

Mr Perrottet said he could not speak about he information provided to him by the public service because a newly established parliamentary complaints process included an anonymous reporting option.

“It is incredibly important that we allow for anonymous complaints to be made,” the premier said.

“Whilst it’s difficult for me today to have made this decision, and not be able to provide further details in relation to the information I received yesterday, I ask you to trust my judgment … because the decision I made is to ensure that staffers and members of the public service feel comfortable in a workplace environment.”

The premier would not rule out Ms Petinos returning to his cabinet, calling her a passionate young minister who had worked incredibly hard.

Mr Perrottet announced Ms Petinos would be removed from his cabinet with immediate effect on Sunday evening, saying “some further matters” had been brought to his attention.

Reports on Monday said Ms Petinos was sacked over her dealings with a public service department, and her departure was not directly related to bullying allegations.

Ms Petinos issued a statement thanking her staff and signalling she intends to continue as the member for Miranda.

“I am proud of my work while I served the people of NSW as minister for small business and minister for fair trading,” she said.

“The intense pressures and stresses of such important portfolios are significant for both staff and their minister.

“I would never intentionally offend anyone or make them feel uncomfortable, and if I did I am truly sorry.”

A report had claimed one of Ms Petinos’ former advisers lodged a complaint with the Department of Premier and Cabinet about being “relentlessly bullied” by others while at work.

Up to eight staff members had left her office in the past seven months, according to reports.

Instagram and Facebook are stalking you through their apps. What can you do about it?
Embattled minister refuses to stand aside over Barilaro scandal
Today's Stories