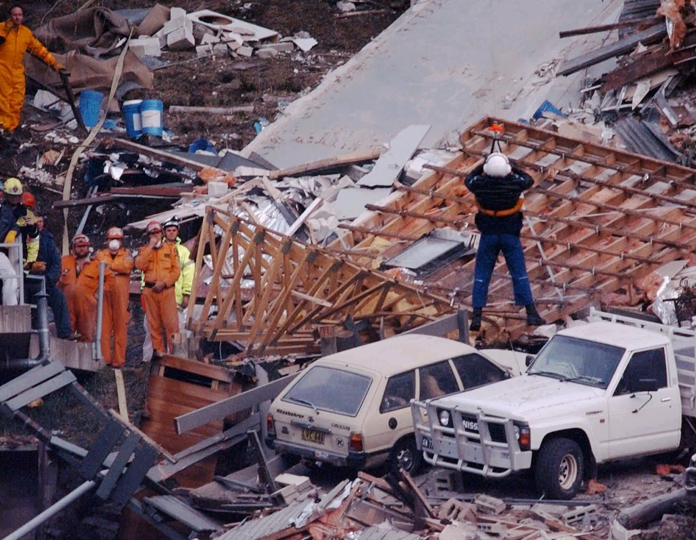 Rescuers amid the tangled wreckage where 18 lives were lost. Photo: AAP

Mark Pigott remembers the cries of black crows breaking a heavy silence after the Thredbo disaster.

Pigott, an Olympic skier, watched from afar as rescue workers searched through rubble in the days after the landslide that claimed 18 lives at the ski resort in July 1997.

“Whenever they thought they could hear something, they went ‘hush hush hush’,” he tells AAP.

Pigott, who competed in acroski at the 1992 Winter Olympics, was in Thredbo and Perisher for training at the time of the landslide, which decimated two ski lodges just before midnight on July 30.

While staying at the nearby town of Jindabyne, Pigott was woken by a phone call from his father at dawn.

‘Sure enough, there it was’

“I ran and put on the TV and, sure enough, there it was.”

Today marks 25 years since the landslide, one of the deadliest natural disasters in Australian history.

After sunset, skiers will commemorate by carrying flares down the slopes, a long-time weekend winter tradition at the resort.

They will remember the victims, who were all part of the tight-knit Thredbo resort community, including hotel staff, maintenance workers, management and housekeepers.

Ski instructor Stuart Diver was the only survivor after being trapped in a small air pocket under one of the lodges for several days. His wife, Sally, was one of the victims.

Mr Diver, who is now Thredbo’s general manager, says Australians continue to have an emotional attachment to his story.

“Everyone remembers where they were on that day, when the landslide ended,” Mr Diver said in an interview on the Better Than Yesterday podcast last year.

“I’m really no different to anyone else, I just happened to go through an unfortunate situation and come through the other end.”

In 2000, State Coroner Derrick Hand found the landslide was triggered when water from a leaking main saturated an embankment on the Alpine Way road.

The ground gave way near the Carinya ski lodge, shearing it from its foundations and pushing it onto the Bimbadeen lodge.

Witnesses described hearing creaking, groaning and screeching “not unlike a steam train coming to a halt” in the hours before the collapse.

But it is the silence that stands out in many people’s memories of the aftermath, as rescuers used highly sensitive audio equipment in their attempts to find signs of life.

The rescue effort and resulting investigation have gone on to inform disaster training around the world.

NSW Police this week paid tribute to the rescuers, saying they worked in extremely dangerous conditions but still managed to find Mr Diver “beyond all odds”.

Fire and Rescue NSW assistant commissioner David Lewis, who was part of the Thredbo recovery effort in 1997, said the disaster spurred the agency to become a word leader in responding to collapsed structures.

“Not only was it a building collapse, but it occurred in an alpine environment with snow and cold temperatures, something we hadn’t really faced before,” he said.

Pigott said though people had slowly moved on, the memories of that winter night remained.

“It’s incredibly sad, very raw and personal, because everybody knew somebody involved.”