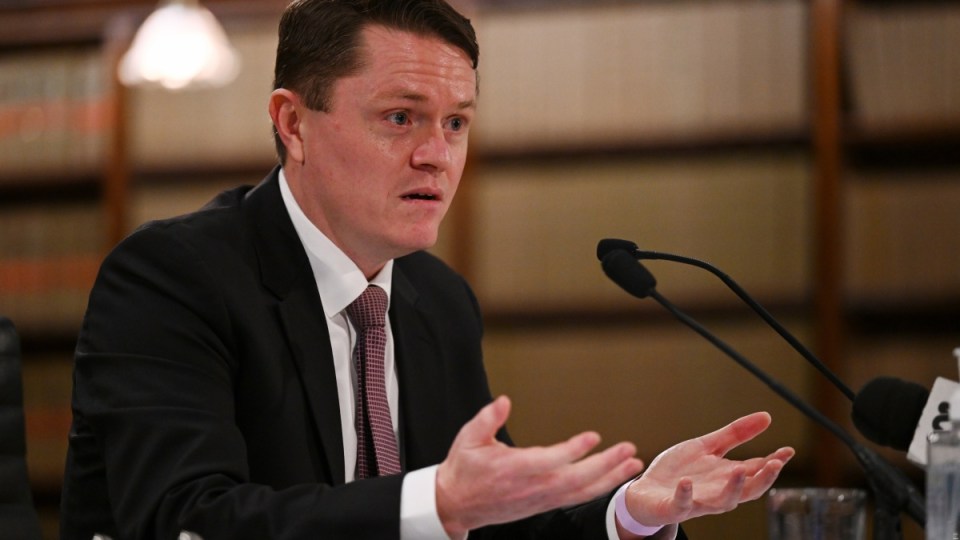 Government lawyer Chris Carr at the inquiry into John Barilaro's appointment to a US trade job. Photo: AAP

A senior NSW government lawyer has told an inquiry into former deputy premier John Barilaro’s appointment to a New York trade job that claims the role was first given to someone else are wrong.

The parliamentary inquiry resumed on Tuesday, hearing from Department of Enterprise, Trade and Investment general counsel Chris Carr, who held the same role with Investment NSW from June last year to April 2022.

She subsequently lost her senior job at Investment NSW after the New York posting was withdrawn, she said.

Ms West said Investment NSW CEO Amy Brown told her the role “will be a present for someone”.

On Tuesday, Mr Carr said he had “limited” involvement in Mr Barilaro’s appointment and disputed evidence previously given by other witnesses before the hearing.

He said he was available to answer any questions Mr Barilaro had about the contract he was offered, as he was for other senior trade and investment commissioner roles.

“It’s not typical for a general counsel to be overseeing what is essentially a people and culture process that’s handled by the (interview) panels,”  he said.

Mr Carr was asked in September to prepare advice on why the appointment of senior trade and investment commissioners was a public service appointment, and whether it could be a ministerial one.

He told the hearing the request came from Ms Brown or her chief of staff, not from Mr Barilaro, with whom he had little interaction.

Ms West’s testimony that she was “fully offered the job” was also “not correct”, Mr Carr said.

“My understanding is that Ms West was well advanced in the process, but not at the end of it,” he told the inquiry.

Ms West told the hearing she had spoken to Mr Carr after learning she would not be sent to New York for the job and took a note of their conversation at the time.

During a phone call last September, she said Mr Carr had told her he was “horrified” by her situation.

“That’s not a word I would have used,” Mr Carr told the hearing.

He was not providing legal advice when he spoke with Ms West and did not take a note of the conversation.

“I had a colleague who was upset and it’s not my usual practice when giving comfort and consolation to a colleague … to take notes and submit them later on,” he said.

“There was nothing here that went to my professional responsibilities.”

Mr Carr said Ms West’s note was a summary of their conversation and only her interpretation of it.

He took a number of questions on notice during the hearing, saying it was not “the forum or the setting for me to be detailing legal advice” provided in the past.

Mr Barilaro announced last month he would withdraw from the role, saying it was “not tenable with the amount of media attention this appointment has gained”.

He has maintained he followed the proper processes.

Premier Dominic Perrottet has launched an internal inquiry into the appointment, led by former public service commissioner Graeme Head, which he expects to be finalised in the coming weeks.

Fewer sales: How retailers plan to claw back their COVID-19 costs
NSW rail strike planned for next week
Today's Stories