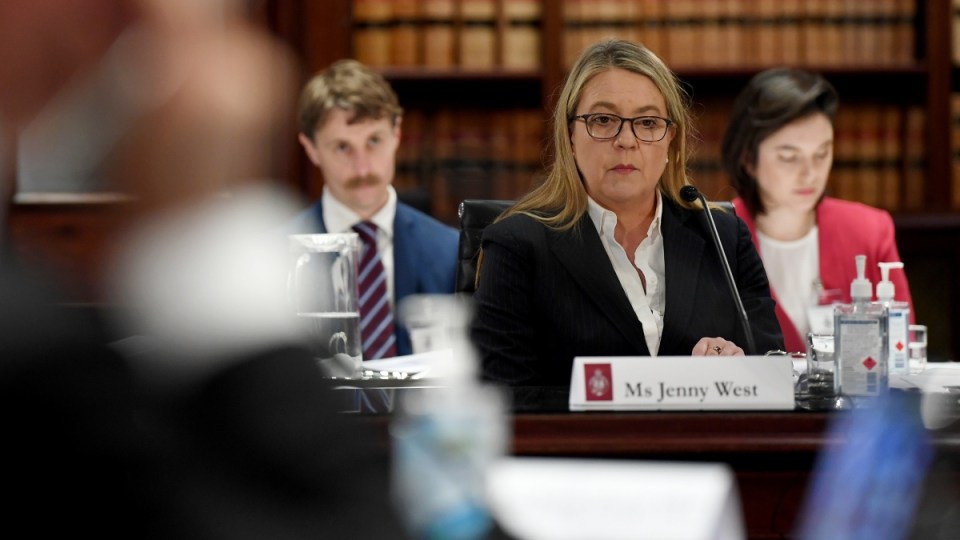 Jenny West's job offer was rescinded, and then she was made redundant, she told the inquiry. Photo: AAP

Two staffers who worked for former NSW deputy premier John Barilaro have been called to give evidence to a public inquiry into how their old boss landed a lucrative trade role in New York City.

Chair of the NSW parliament upper house committee, Greens MP Cate Faehrmann, said the two employees had been sent invitations to give evidence next Tuesday.

Meanwhile, testimony given by former public servant Jenny West on Monday about Mr Barilaro’s appointment as the state’s senior trade and investment commissioner to the Americas has been sent to the NSW Independent Commission Against Corruption.

Ms West, a former deputy secretary for Investment NSW, told the inquiry she was offered the $500,000 job last August.

Her opening statement to the committee included allegations her withdrawn job offer would become a “present for someone”.

The committee investigating the appointment agreed it should be referred to ICAC, Ms Faehrmann said.

“The committee was particularly concerned at Ms West’s evidence that the role was being given as a ‘present’ to someone else,” Ms Faehrmann said in a statement.

“The public demands that public service roles, funded by the taxpayer dollar, be recruited with the highest level of integrity.

“It is clear that this has not been the case in this situation.”

Ms West said she was told in October by Investment NSW CEO Amy Brown that she no longer had the position, which was given to Mr Barilaro in June 2022.

“Ms Brown said that the position – and this is a quote – ‘will be a present for someone’,” Ms West said.

Mr Barilaro, the former Nationals leader, resigned from parliament last year. He was named earlier this year as the successful candidate, before withdrawing last month amid a political storm.

An ICAC spokeswoman said “the commission cannot confirm or deny if it has received referrals, or whether it is considering or undertaking investigations”.

Ms West told the inquiry she felt “so confused” and “shocked” when Ms Brown told her she no longer had the New York job and would also be made redundant from her position.

She said she was told the appointment was rescinded because the government decided trade commissioner roles would become ministerial appointments.

Premier Dominic Perrottet said reports coming out of the inquiry were worrying.

Mr Perrottet said a second review he launched into the appointment was expected to report back within weeks.

“I will make that public and I will immediately respond to any of the recommendations,” he said.

“Obviously yesterday, the reports are concerning and from my perspective, this independent review will look at that.”

Trade Minister Stuart Ayres issued a statement on Monday rejecting any suggestion he exerted political influence on the recruitment process, saying Ms Brown was the decision-maker for the role.

“I did not say the job was to be a ‘present’ for anyone and I find that idea to be offensive,” he said.

Labor’s upper house leader and committee member Penny Sharpe said there was “something really rotten at the core of what’s happening in NSW”.

She said Mr Ayres had “so many questions” to answer.

“His role throughout this entire process has been extremely murky,” Ms Sharpe told Sydney radio 2GB on Tuesday.