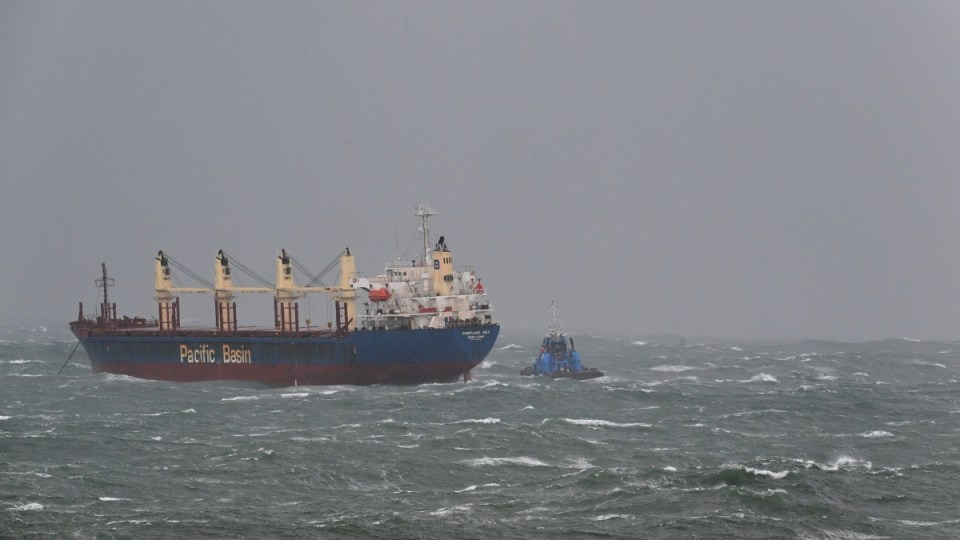 A cargo ship off the NSW coast that lost power in torrential rain is anchored south of Port Botany. Photo: AAP

A cargo ship that lost power off the NSW coast in heavy seas will remain anchored until weather conditions allow the stricken vessel to be returned to shore.

Premier Dominic Perrottet says the 170-metre bulk carrier Portland Bay is now stable and thanked the crew who worked through the night to secure the drifting vessel “in incredibly treacherous conditions”, including torrential rain and 11-metre swells.

The carrier lost power after leaving Port Kembla, near Wollongong, on Monday morning, sparking fears it could crash into cliffs during the wild weather.

“I thank very much the crews of those tugs for the heroic work they did overnight,” the premier told reporters on Tuesday.

The job was far from over and the torrential weather meant the situation can change quickly, he said.

Port Authority of NSW CEO Philip Holliday said the Portland Bay crew was taking the opportunity to repair the ship’s engines as authorities wait for improved weather to return the vessel to shore.

“In the currently stable environment all crew have had the opportunity to refresh and get some rest after working in these extremely difficult and hazardous conditions throughout yesterday and overnight,” he said.

The Portland Bay is anchored about 1.2 nautical miles off Botany Bay near Cronulla Beach, Mr Holliday said on Tuesday afternoon.

The ship dropped anchors after an operation to move it further offshore on Monday was unsuccessful.

“Tow lines broke in the extreme weather and ocean conditions … the ship was moved northwards towards a more sheltered location,” Mr Holliday said.

A third tug boat, the Glenrock, has joined the SL Diamantina and Bullara from Newcastle, punching through 10-metre seas before arriving on Tuesday afternoon.

“The specialised vessel with additional deep sea response capability will be key in the next phase when moving the Portland Bay to safety,” Mr Holliday said.

“The plan today is to keep the vessel stable in the current location with tugs ready and available so we can affect a tow if needed, but otherwise keep her where she is as we await an improved weather window to bring her into Port Botany.”

COVID-19: How careful do I still need to be around older and vulnerable family members?
Federal response stronger in flood crisis
Today's Stories