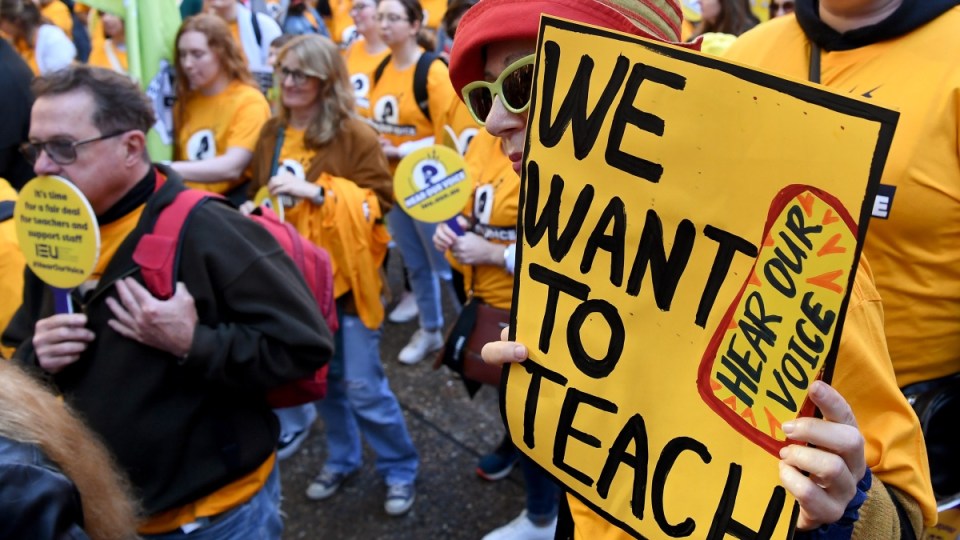 A historic 24-strike by NSW public and Catholic teachers is the result of the state government’s failure to address chronic teacher shortages, unions say.

The action by 85,000 public and Catholic school teachers on Thursday will be the third strike in six months and is expected to affect about a million families, just a day before two weeks of holidays.

Thousands of teachers are expected to descend on Sydney’s CBD after the budget revealed no more than a 3.5 per cent pay rise was on the table.

It’s the first time in more than 25 years the NSW Teachers Federation and Independent Education Union NSW/ACT have joined forces to strike for 24 hours in a show of strength that will close schools.

“We have a crisis in the form of a teacher shortage, a crisis that is the government’s own making,” Federation President Angelo Gavrielatos told reporters on Wednesday.

“The government has known for years the causes of this crisis: uncompetitive salaries and unsustainable workloads,” he said.

“Students have been denied not only their learning opportunities but are also being denied their futures.”

Mr Gavrielatos urged the government to retain teachers in the stretched sector by lifting wages by around seven per cent in order to keep up with inflation and living costs which have spiked in recent months.

“Teacher salaries have declined relative to other professions over the last 30 years … our claim is clear based on an independent inquiry… recommending a five to 7.5 per cent increase per annum,” he said.

He also noted that 1906 teaching vacancies statewide belies structural problems, saying the shortage will only worsen over the coming decade.

“Catholic employees are shortfall of 4000 teachers and we’re going to need an extra 11,000 teachers by the end of the decade – 15,000 additional teachers are required and the government knows this based on its own internal research,” he said.

The strike comes amid a busy week that has rocked the state with trains delayed as workers step up their demands for safety and a pay rise as well.

The Rail, Tram and Bus Union is meeting with the NSW government on Wednesday for talks on a new Korean-built intercity train fleet.

The most recent dispute was sparked by a government offer to pay workers up to $18,000 to operate the fleet before safety modifications are made.

The union’s NSW secretary Alex Claassens has accused the government of playing political games, calling that offer a bribe.

Transport for NSW has warned a union ban on foreign-owned trains on Friday would see Sydney Trains services reduced by 70 per cent during peak periods, and commuters should expect delays and cancelled services.

There will be significant disruptions to Sydney and NSW train routes including a reduction in services to the Central Coast, Newcastle, Hunter, Blue Mountains, Southern Highlands and South Coast on Thursday and Friday.

Meanwhile, hundreds of nurses voted on Tuesday to continue with industrial action, rejecting the government’s offer of a three per cent pay rise.