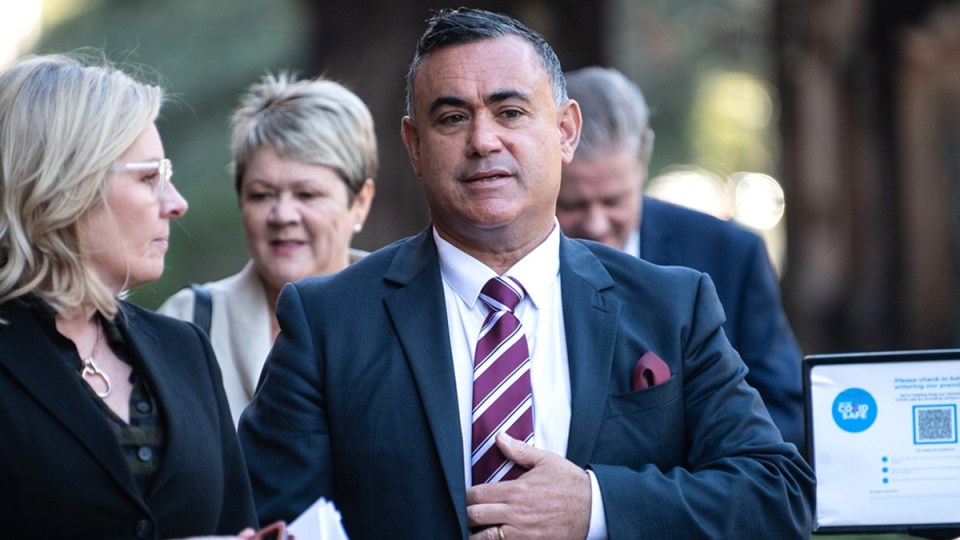 The chosen candidate for a plum NSW overseas trade role was dumped after changes requested by then deputy premier John Barilaro, who later took the job.

A NSW parliamentary inquiry into Mr Barilaro’s appointment as a trade ambassador in New York is expected to hear from the ditched candidate, senior Investment NSW bureaucrat Jenny West.

The upper house committee was told trade department secretary and Investment NSW boss Amy Brown had to withdraw an initial verbal offer of the job to Ms West last year.

“She was extremely upset about that, understandably so,” Ms Brown said on Wednesday .

The relationship with Ms West, who Ms Brown did not name in her evidence, then became “irreconcilable” and she was deemed unsuitable for the position.

The senior trade and investment commissioner post comes with a $487,000 salary plus a $16,000 cost-of-living allowance.

Mr Barilaro’s appointment to the lucrative New York post, due to begin on July 12, was announced earlier this month and is being scrutinised by the inquiry.

Controversy over the appointment has dogged the government for nearly two weeks and diverted attention from its big-spending budget.

Premier Dominic Perrottet has given the green light to a separate review into the recruitment process, which he expects within weeks.

Ms Brown, who reported to Mr Barilaro when he was NSW trade minister, was grilled on how her former boss came to take the position.

A request was made by Mr Barilaro’s office in late September to move the trade commissioner positions from an in-house decision for Investment NSW to one requiring cabinet approval.

Cabinet is made up of high-level government ministers, including Mr Perrottet.

This meant Investment NSW was obliged to freeze all existing processes and Ms West’s verbal offer was withdrawn on October 1.

On October 4, Mr Barilaro announced his retirement as an MP.

He was one of a handful of MPs who flagged their retirement in October following the resignation of then-premier Gladys Berejiklian due to the fallout from her evidence at the Independent Commission Against Corruption.

Mr Barilaro was offered the job in May and signed the contract earlier this month after a global recruitment process billed to the taxpayer.

The inquiry also heard the NSW government has spent nearly $1 million refurbishing part of the Australian consulate in New York for Mr Barilaro to occupy.

Labor has said the trade commissioner posting is important and it wants Mr Barilaro booted from the job.

“Every taxpayer needs to know whether this is value for money and whether we’re sending the best person to New York,” Labor’s upper house leader Penny Sharpe said.

“The Premier needs to show some leadership and make sure that John Barilaro doesn’t jet off to Manhattan,” he said.

If Mr Barilaro is ousted from the role inside the six-month probationary period, taxpayers will owe him a week’s wages; if he is removed later he may be owed the full three-year service period.

Labor wants to hear from other candidates for the position to review the recruitment process.

‘It’s important not to over-react’: Australia’s top economists on how to fix high inflation
NSW teachers to walk out, trains disrupted
Today's Stories