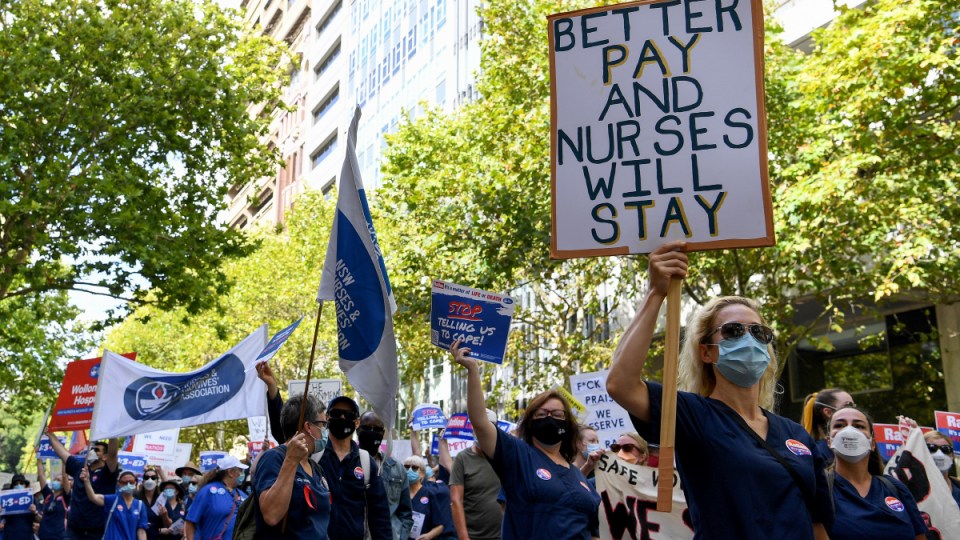 There will be a wave of industrial action this week by train drivers, teachers, nurses and midwives. Photo: AAP

NSW is bracing for a week of industrial action with train drivers, nurses and midwives and teachers calling for better pay and staffing.

Rail commuters have been warned to expect delays with action by The Rail, Tram and Bus Union starting on Tuesday with a go-slow, with train drivers limited to 60 km/h.

The action will escalate until Friday when drivers will refuse to drive foreign-built trains.

The union’s NSW head Alex Claassens said without those trains the network would be reduced to about 30 per cent capacity.

The action is driven by safety concerns over a new fleet of Korean-built trains, which the union maintains need to be modified to keep passengers safe.

“At a time when the NSW economy is facing headwinds … to unnecessarily spend money on modifying or making all the modifications that the union’s asked for I think would be irresponsible,” he told Sydney radio 2GB on Monday.

Public and Catholic school teachers across the state are also frustrated and will be striking for 24-hours on Thursday.

Teachers are calling for a pay rise to keep up with rising inflation as they grapple with unsustainable workloads and worsening staff shortages.

“We have children across NSW missing out every single day because of the teacher shortages, including those in Year 12 which is the most vital year of their schooling,” he said.

Nurses and midwives are also planning to stop work for various hours – from two hours to 24 hours – on Tuesday demanding better staff to patient ratios.

Hundreds are expected to participate in a mass meeting of union members in Sydney CBD.

“The government has ignored the need to address the extra extreme workloads nurses and midwives are juggling,” NSW Nurses and Midwives Association leader Shaye Candish said.

The government wants to impose maximum fines of up to $55,000 for the first day of illegal industrial action and $27,500 for each subsequent day.

Meanwhile, environmental group Blockade Australia’s has also flagged a week of disruptive protests in Sydney, with 11 of the group arrested on Monday.

About 50 protesters marched north the city on Monday but they were blocked by a heavy police presence from gaining access to the Harbour Bridge – a previous target of the group.

One of the climate activists blocked access to the Harbour Tunnel with a car for about an hour, creating traffic chaos with queues stretchining several kilometres.