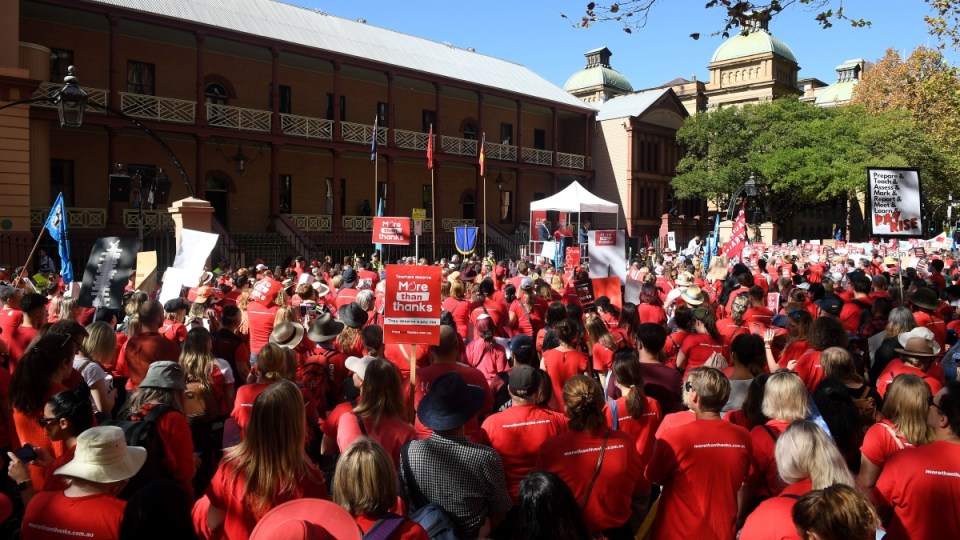 NSW public sector workers are unhappy with the budget deal which they say makes them worse off. Photo: AAP

Thousands of NSW public school and Catholic school teachers will go on strike next week after the state budget failed to deliver an improved pay offer.

A week ago the teachers’ unions gave Premier Dominic Perrottet an ultimatum to improve the 3 per cent pay deal he offered over the next financial year.

Public sector workers are unhappy with the deal, which they say makes them thousands of dollars a year worse off with inflation running at 5.2 per cent, and predictions it could hit 7 per cent by the end of the year.

The NSW Teachers Federation and the Independent Education Union NSW/ACT held a historic joint meeting on Tuesday and decided to strike for 24 hours on June 30.

Members of both unions will rally outside Parliament House in Sydney as well as in regional towns across the state and the ACT.

Mr Perrottet had hoped lifting the 2.5 per cent cap on increases to public sector wages would stem industrial action and recent strikes from government workers including teachers, nurses and transport staff.

The new policy confirmed in the state budget on Tuesday includes a 3 per cent pay rise over the next financial year, with another 3.5 per cent the following year for workers who make a “substantial contribution to productivity-enhancing reforms”.

“It is important to maintain competitive wages to attract and retain the best talent,” Treasurer Matt Kean said.

“In the context of a strong and growing economy, this two-year increase to wages is an affordable and sensible policy,” he said.

NSW teachers to strike next week