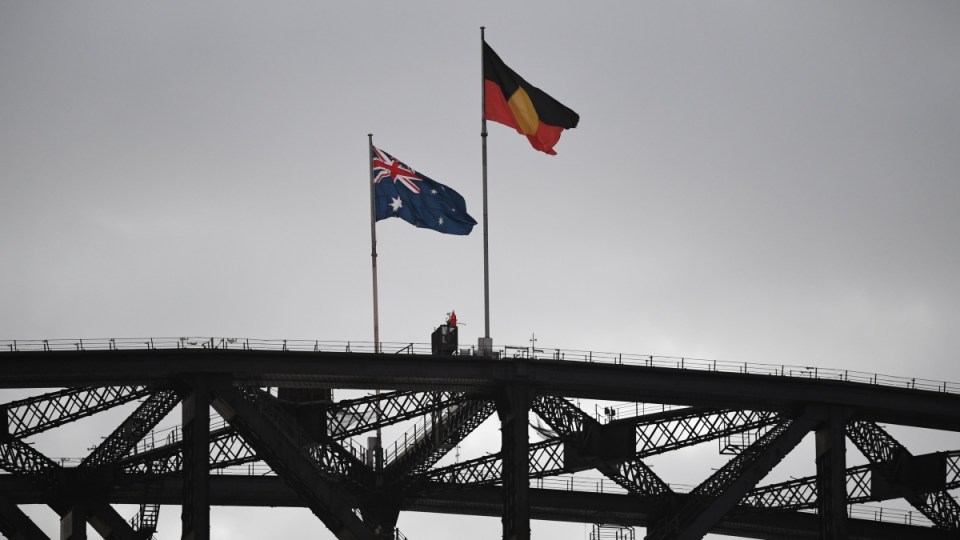 The $25 million price tag to make the Indigenous flag a permanent addition to the bridge has raised eyebrows. Photo: Getty

NSW Premier Dominic Perrottet has promised to go “line by line” through the $25 million quote to make the Aboriginal flag a permanent addition to the Sydney Harbour Bridge.

The plan to install a third 20-metre tall flagpole on the bridge by the end of the year for the Indigenous flag was part of a pre-state budget announcement on Sunday – but the eight-figure cost has raised eyebrows.

Mr Perrottet said on Sunday he didn’t know why the project was so expensive.

“But apparently it does, apparently that’s the costing, and I think that it’s an important decision that we’ve made,” he said.

“I think it brings unity to our country and I think it’s a small price to pay for that unification.”

By Monday, he had a different view, agreeing the bill “doesn’t seem to pass the pub test”.

“But like most fair-minded people across the state, I would say that it seems to be a pretty ridiculous and outrageous cost.”

Mr Perrottet said there were heritage issues with the bridge, and other difficulties that contributed to the cost.

“All three poles will need to be replaced and all three of them are the equivalent size of a six-storey building,” he said.

He said he would go through the quote and be “making sure we bring it down”.

“This is an important project,” he said.

“I don’t want the cost getting in the way of what is an important decision that we’ve made as a government and that is to fly the Aboriginal flag alongside the NSW flag and the Australian flag on the bridge.”

Mr Perrottet said he would work with state bureaucrats “line by line” to “make sure the taxpayers of NSW get value for money”.

“This shouldn’t be a divisive issue,” he said.

“No doubt the Aboriginal flag should be flying above the Sydney Harbour Bridge but I would have expected that after 12 years in office Mr Perrottet and Mr Kean would have mastered the art of procurement and wouldn’t have to spend so much of the public’s money,” he told Sky News Australia.

“We can only speculate that with a flag with such an expensive price tag it’s either going to be the most gold-plated flag in the world [and] it certainly will be the world’s most expensive.”

In another pre-budget announcement, the state government has announced shared equity housing scheme for front-line workers and singles over 50.

Mr Perrottet said housing affordability was becoming a challenge for families across NSW.

“We are announcing a shared equity scheme which will provide an opportunity for our frontline workers, our teachers, our nurses, our police officers, to get a leg up and get into the property market,” he said on Sunday.

The government will contribute up to 40 per cent of the equity of a new home and up to 30 per cent on an existing home. It will require a 2 per cent deposit.

The scheme would tie in with the federal government’s shared equity scheme, together doubling the amount of homes available for frontline workers and singles over 50, Mr Perrottet said.

Greens housing spokeswoman Jenny Leong criticised the scheme, saying the people most desperate for housing would not be eligible.

“This scheme is so limited in terms of who can access it that it will have no benefit to people who are eligible and work in the inner suburbs of Sydney, with virtually no properties for a family meeting the price cap,” she said.

The state government also committed $37.9 million to improve before and after-school care services and $206 million towards a sustainable farming program.

The NSW government also committed $56.4 million to building a four-day walking track at the Dorrigo Escarpment through the Gondwana Rainforests on the NSW mid-north coast.