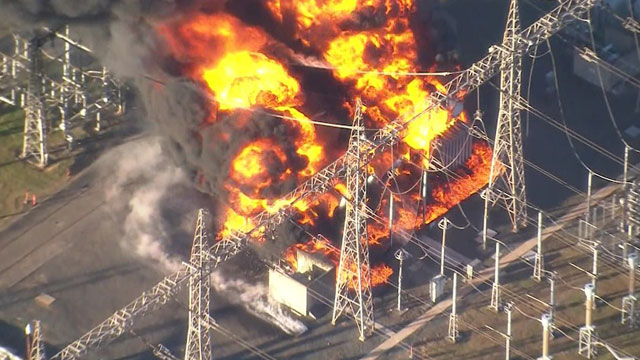 A major blaze at an electrical substation south of Sydney is expected to burn for days after nearby residents in Wollongong and Unanderra were told to stay inside their homes on Saturday night.

More than a dozen fire crews were called to the scene at the Transgrid Dapto substation as thousands of litres of oil caught fire and triggered explosions on Saturday.

Authorities reported no injuries, although one person was evacuated from the site.

Energy Australia said the fire caused nearby Tallawarra Power Station to be taken offline for about two hours, but it was back online ahead of the evening energy peak.

Firefighters initially were forced to wait several hours for the site’s electricity to be shut off as they prepared to fight the blaze.

Dewberry said it was a delicate operation and firefighters were working strategically to bring the fire under control.

“We need to make sure we’ve got a few things in place before we start applying foam and water,” he said. “The 330,000 volts around us at site does make it a bit hard. It just adds that complexity.

Myrkl: The new anti-hangover pill said to break down up to 70 per cent of alcohol in an hour
Nothing fishy about Aussie inventor’s carbon-saving ‘shark-skin’ tech
Today's Stories