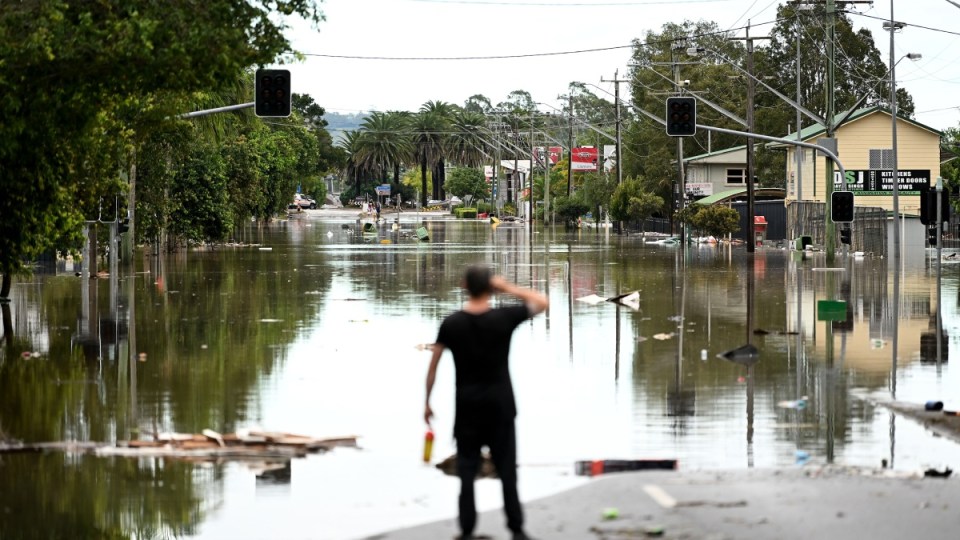 The response of NSW disaster agencies to floods earlier in the year is in focus at an inquiry. Photo: AAP

Locals from a flood-affected NSW Northern Rivers town have lashed out about the response to the disaster, saying red tape forced them to make 10-kilometre treks to find people stranded by landslides.

A community meeting was held in Mullumbimby on Monday as part of the NSW government’s independent inquiry into the catastrophic flooding in February and March, with locals given four minutes to speak.

Mullumbimby was uniquely affected because the small hillside town was hit by multiple landslides, Justin from the Wilsons Creek, Huonbrook and Wanganui Community Association told the inquiry.

The landslips took out roads, houses, powerlines, as well as the town’s internet and phone connections.

Local police and firefighters were helpful but many frustrated Mullumbimby locals criticised state and federal authorities.

“The next set of authorities, which took weeks to actually turn up on the ground were the army, the state-based rural fire services and Resilience NSW, and for the most part, those authorities weren’t able to communicate effectively on the ground,” Justin said.

“They flew around for days and days, never landed and spoke to anyone.

“They didn’t provide us with anything we needed for the most part.”

He suggested the government recognise local communities would naturally become first responders and provide people with training and support.

Another man told the inquiry members of the ADF were not allowed to walk more than one kilometre from where they parked their Jeeps.

This forced members of the community to walk up to 10km in the week after the landslide to locate people who had not been heard from.

Others said “crumbling and dangerous” damaged roads continued to cause major issues.

“One (car) was teetering … looking like it was potentially going to fall off,” one woman told the hearing.

“That’s a daily occurrence up there now,” she added, suggesting the council undertake daily inspections of the damaged roads.

“It’s just so saturated up there, but it needs to be daily or someone’s going to die.”

Captain of the Byron Bay Rural Fire Service, John, said the biggest problem facing the Northern Rivers was a lack of disaster planning.

The fire captain with 33 years experience as an emergency volunteer said he had fought fires at Black Saturday and Ash Wednesday.

“I’ve been to all the big fires and the main thing we had was a disaster plan,” he said.

“Every council had a disaster plan.”

The only disaster plan he was aware of for Byron Shire Council was a six-year-old erosion plan, which was still in its proposal stage.

“So my thing is, why haven’t we got one and when are we going to get one?”

When the flooding began in Mullumbimby, he rang his station and asked for help and was told they were not allowed to attend the town without a request.

Five days passed before members of any RFS outside Mullumbimby were allowed into the town.

That kind of delay could be remedied with changes to the council’s disaster plan trigger points, he said.

“We’re going to have conversations about this and I hope that you open the doors for us because it will solve a lot of problems.”