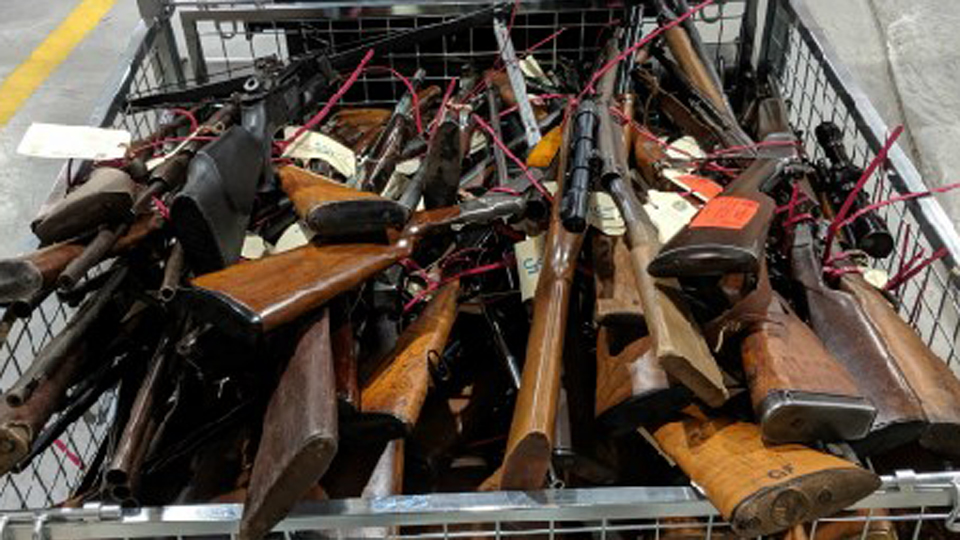 More than three tonnes of guns will be destroyed after being seized by NSW Police or handed in.

Three tonnes of firearms, including rifles, pistols and shotguns, will be destroyed in NSW this month after being seized by police in criminal investigations or handed in by the community.

“They are going to go to the scrap heap,” Deputy Premier and Police Minister Paul Toole told media on Monday.

“They will be firearms that will no longer be in people’s households.

“They are firearms that are no longer going to be out there on our streets.”

A number of the weapons were seized during police operations in recent months, including 84 taken by anti-gang Strike Force Hawke, and further weapons taken by Strike Force Erebus.

“The message is very strong that these criminal networks if you are holding an illegal firearm, our police will continue to be out there to seize them and to take them from you,” Police Commissioner Karen Webb said.

“We’ve got strong gun and firearm legislation in New South Wales that restricts the use to licensed holders.

“But when it falls into the wrong hands or has to be surrendered, then people are able to surrender their firearms no questions asked.”

A firearm amnesty, put into place in July of last year, had assisted in allowing firearms to be surrendered no questions asked, she said.

Police collect hundreds of firearms every week which are then sent to the NSW Police Weapons and Ordnance Disposal Unit before being audited and processed for destruction.